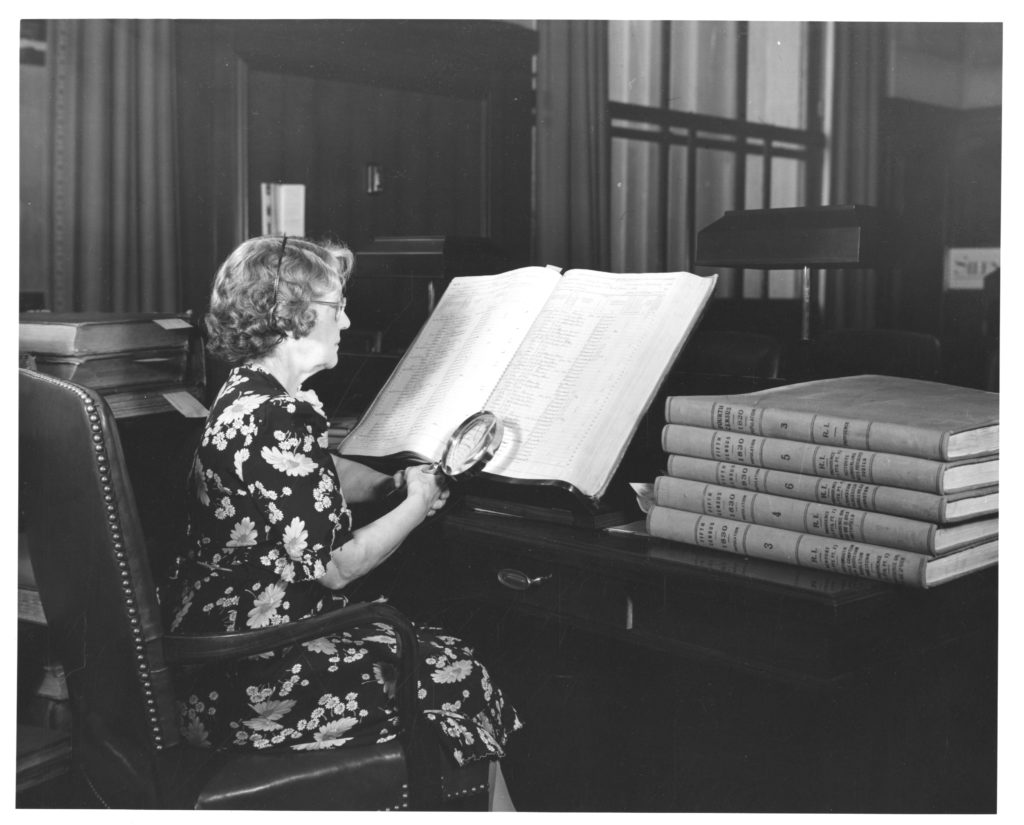 In this edition of Visual Cues and Clues, let’s step outside the box and explore photographs from a different angle. Instead of looking at what’s in the photograph, let’s explore what’s on the photograph. Markings, emblems, and logos sometimes lend a wealth of information that may not be identified through what is depicted in the image. Moreover, sometimes you can track down the archival institution that houses a photo you found online or in a book by simply examining what markings you can find on it.

Emblems, logos, and a variety of markings can take any shape or form. They can be an agency’s logo to a specific photography unit’s emblems. Even hand written information can serve as helpful clues. The information gleaned from what can be found on the photo can be used to locate the archival location of the image as well as understand the context around when it was taken. 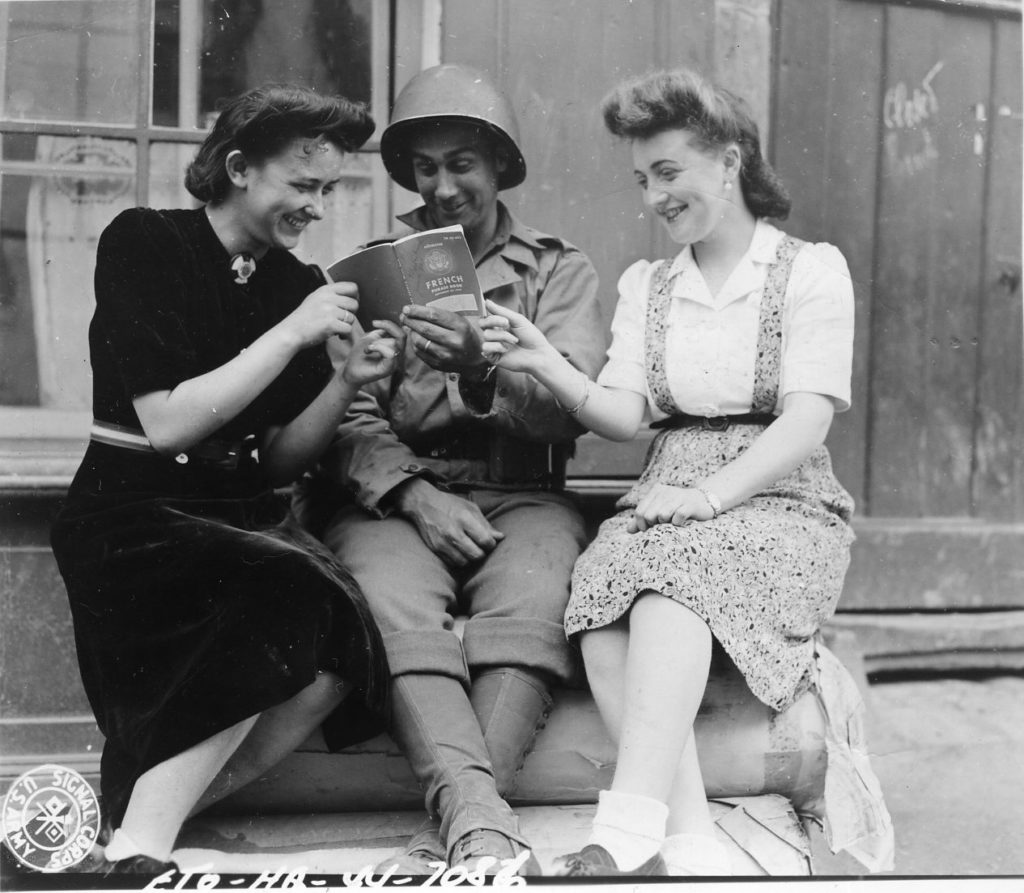 1. A logo in the bottom left corner that reads “Signal Corps, US Army.”

The United States Army Signal Corps have long been the units responsible for photographing military activities, especially during wartime. In this photograph from World War II, you can see the Signal Corps emblem in the bottom left corner of the photograph. While not every single Signal Corps photograph includes the emblem, this marking is a great way to identify the image and where it may be located. Since the Signal Corps was a US Government organization, it is no surprise their photographs are found within the holdings of the Still Picture Branch at the National Archives.

While not the most straightforward marking to the casual viewer, oftentimes numbers written on a photo may indicate the photo’s identifier number. Each identifier number is different depending on where they originated and who used them, but would typically be used to locate the photograph amongst a large collection of photos. In this case, this number–ETO-HQ-44-7086–is a field number used by the Signal Corps. The Signal Corps would assign a photograph a field number shortly after taking the image, then when it was processed by the Army, it would be assigned an official Signal Corps–or SC–number. Unfortunately, there is no way to locate photographs by the field number today, and we only use the official SC number in the Still Picture Branch. 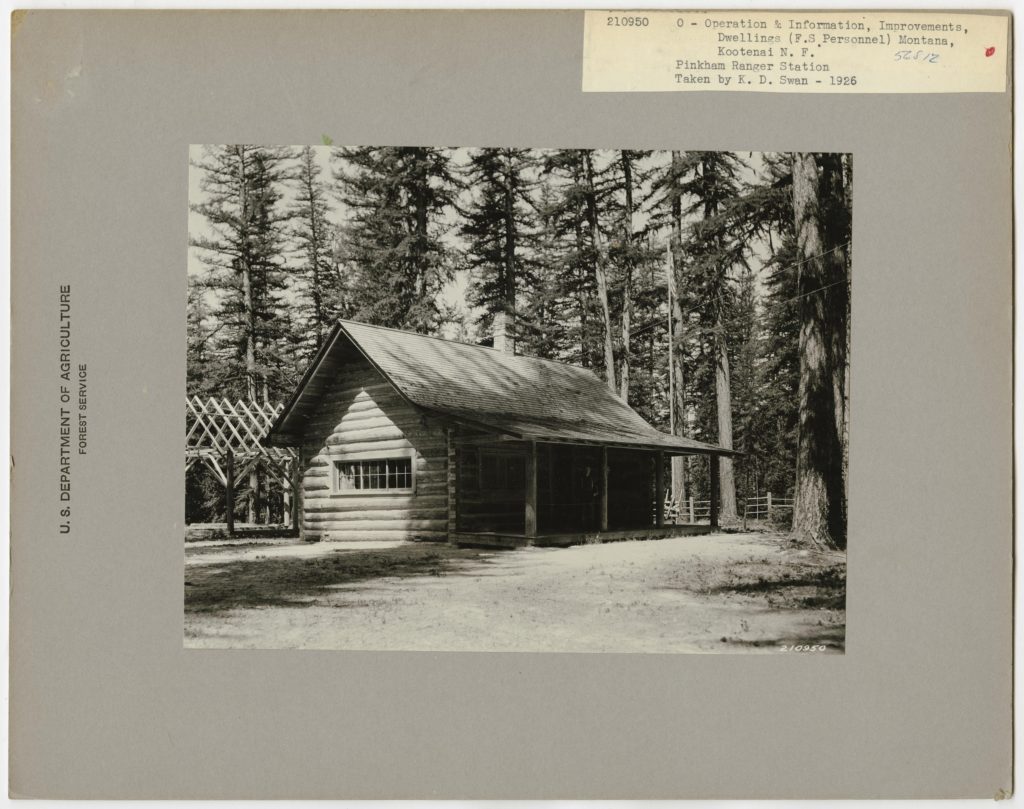 Luckily, this photograph includes a full caption in the top right corner that gives us context as to what is depicted. The biggest clue, however, comes from the stamp along the left side that reads “U.S. Department of Agriculture, Forest Service.” While we may not always get as lucky, this stamp easily indicates the photograph is likely found within the records of the Forest Service. Because the Forest Service is a Government agency, their permanent photographic records are typically found within the holdings of the Still Picture Branch. 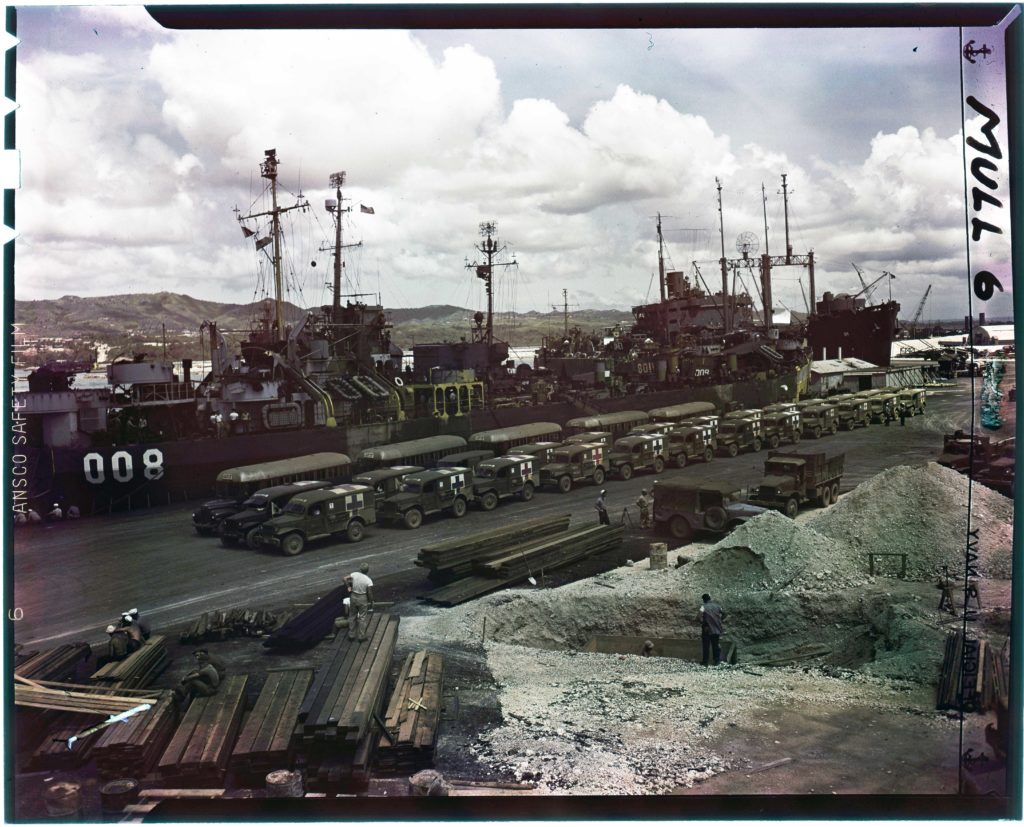 This photograph has been digitally altered to improve the visibility of the writing along the side.

There are four distinct features written along the edges of this image that lend a lot of context to the photograph. They include: 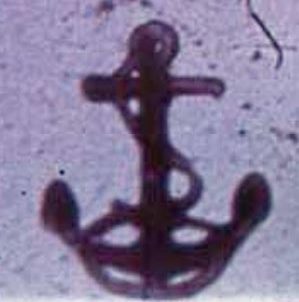 1. In the top right corner we can spot a small anchor. This could mean the photograph is related to the sea.

2. While we cannot decipher the meaning of the handwritten text that reads: “Mull 6,” we can see “Official US Navy” written along the bottom right corner. This text, paired with the anchor, gives us the largest clue that this photograph was taken by the US Navy, whose records are usually found in the Still Picture Branch.

3. Now that we understand who created this photograph, we can learn how they created this photograph by noting the text written along the left side. The text reads, “Ansco Safety Film,” which is the type of film used to create this image. Since we know it is film, we can tell this is a color transparency as opposed to a photographic print.

4. The last clue on the photograph are the small notches in the left corner. Notches in film were used to identify the type of film and the date of its manufacturer. While it may be difficult to decipher the notches today, these markings further reinforces our idea that this is a color transparency. 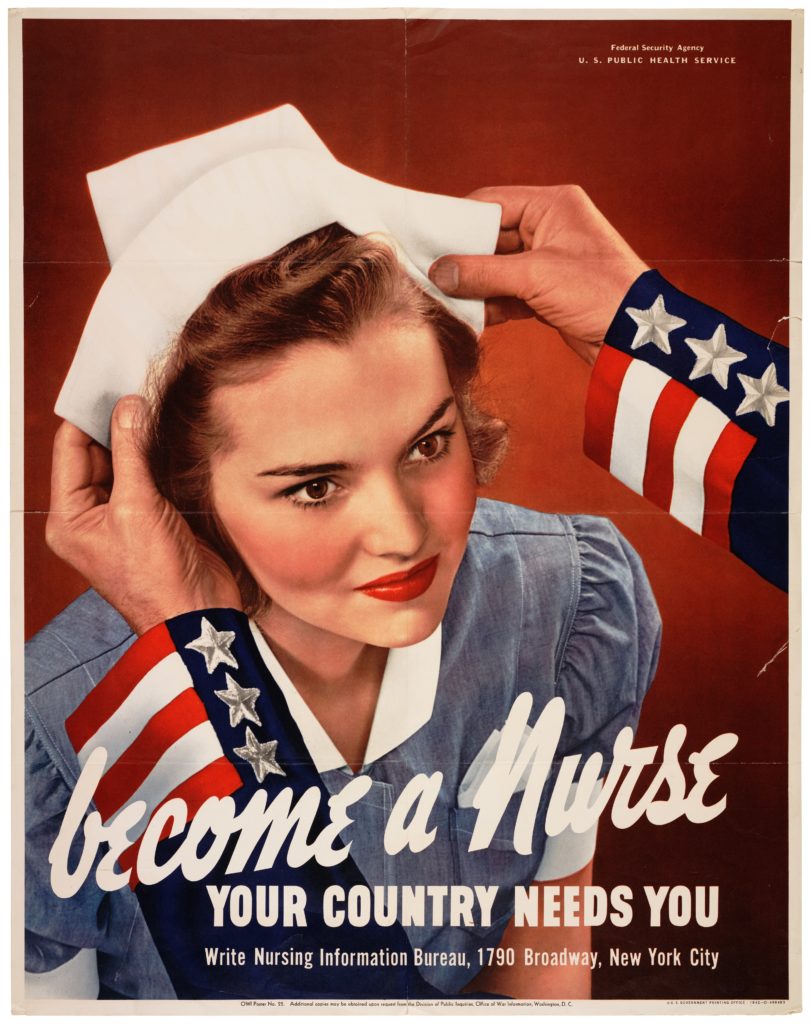 WHAT DO WE SEE ON THIS POSTER?

After examining this poster, the two places to look for information are the top and bottom...

Close up of 44-PA-135. Text reads: OWI Poster No. 22. Additional copies may be obtained upon request from the Division of Public Inquiries, Office of War Information, Washington, D.C.

At the bottom… We read “OWI Poster No. 22. Additional copies may be obtained upon request from the Division of Public Inquiries, Office of War Information, Washington, D.C… U.S. Government Printing Office: 1942-O-498483.” While not as obvious, this indicates the poster was created as part of the war effort because it originated from the Office of War Information. Moreover, the poster was published by the Government Printing Office, which means the Government directly influenced the dissemination of this poster, and its official record copy can be found in the holdings of the Still Picture Branch. 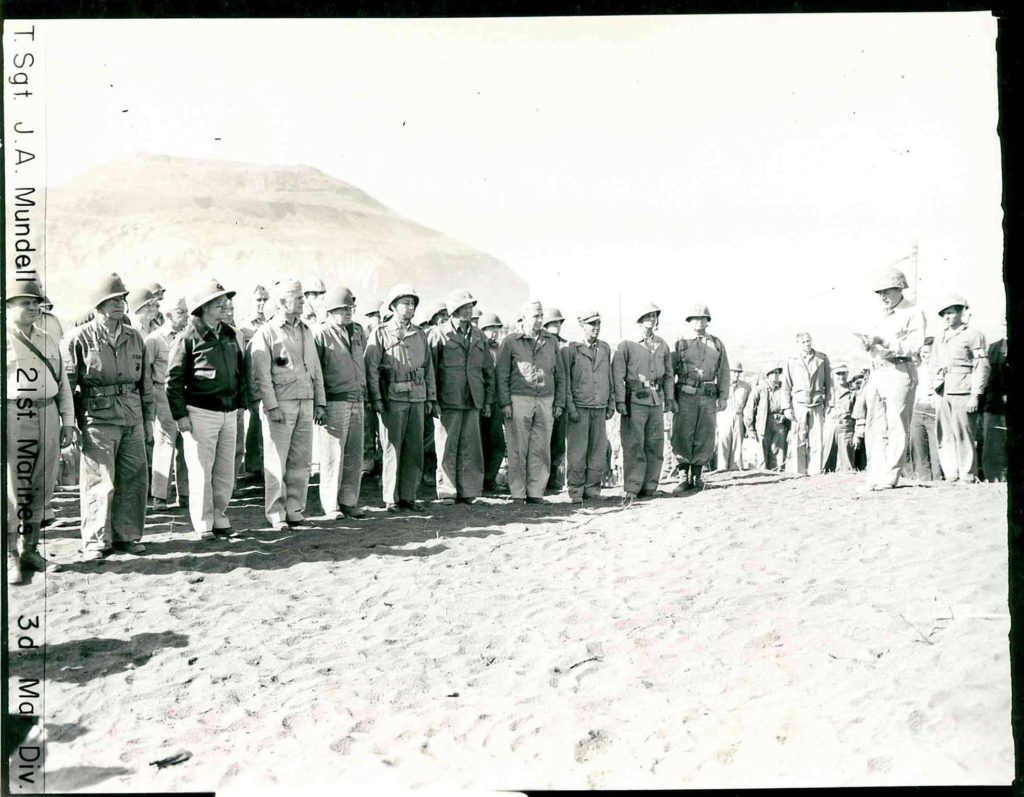 This photograph has been cropped from its original mount. To view the full mount with caption, please visit our online catalog.

After looking at this photograph, we spot a long string of information along the left side that reads: “T.Sgt. J.A. Mundell. 21st Marines. 3d Mar. Div.”

Without even looking at the caption, we now know the photographer of this photo is Technical Sergeant J.A. Mundell. Mundell was part of the 21st Marine Regiment, which is part of the 3rd Marine Division. If we wanted to research further, we could follow the history of the 21st Marine Regiment and learn more about T.Sgt. Mundell, as well as view other official Marine Corps photographs found in the holdings of the Still Picture Branch.

The photographs included in this post have no known copyright restrictions. If you have any questions about the images in this post or the holdings of the Still Picture Branch, please contact us at stillpix@nara.gov.

Generally, copies of photographic records held by the National Archives may be published without special permission or additional fees. The National Archives does not grant exclusive or non-exclusive publication privileges. Copies of Federal records, as part of the public domain, are equally available to all. A small percentage of photographs in our holdings are or may be subject to copyright restrictions. The National Archives does not confirm the copyright status of photographs but will provide any information known about said status. It is the user’s responsibility to obtain all necessary clearances. Any use of these items is made at the researcher’s or purchaser’s own risk.

Proper credit lines are encouraged in the interest of good documentation. They also help inform the public about government photographic resources that are available.

*Because so many of our requests for information cite credits and captions that appear in published works, the inclusion of a photo number in hard copy and electronic publications is of great assistance to both us and the public.

Examples of preferred credit lines are as follows:

If using a large number of our images, the National Archives will appreciate receiving copies of publications that contain our photographs. Such copies can be sent to the Still Picture Branch or the Library, National Archives and Records Administration.

You can also find this blog post on the Unwritten Record.