On September 9, 1957, President Dwight D. Eisenhower signed into law the Civil Rights Act of 1957 (Public Law 85-315). While historians have laid bare the law’s numerous weaknesses, it did result, in its section 101, in the creation of the United States Commission on Civil Rights (USCCR). 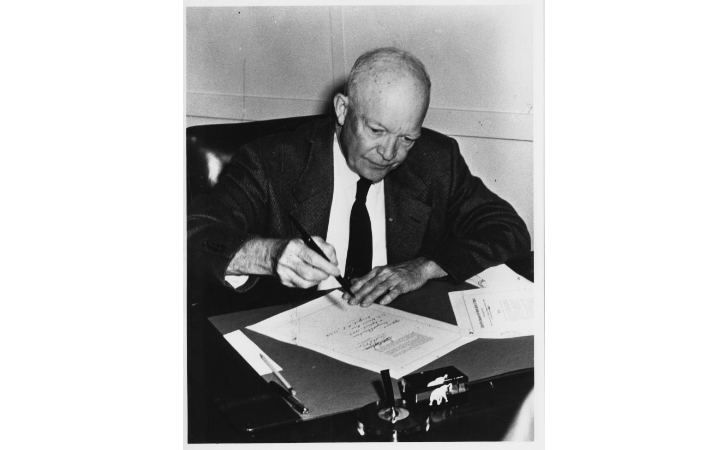 According to the mission of the USCCR, it is, “...established as an independent, bipartisan, fact-finding federal agency, our mission is to inform the development of national civil rights policy and enhance enforcement of federal civil rights laws. We pursue this mission by studying alleged deprivations of voting rights and alleged discrimination based on race, color, religion, sex, age, disability, or national origin, or in the administration of justice. We play a vital role in advancing civil rights through objective and comprehensive investigation, research, and analysis on issues of fundamental concern to the federal government and the public.”

Starting in the 1980s, the activities of the Commission became mired in political partisanship, with some appointees openly questioning the need for the USCCR. Nevertheless, the Commission was reauthorized in 1994 with the Civil Rights Commission Amendments Act. It remains active, conducting investigations, hearings, and issues reports to Congress and the American public. 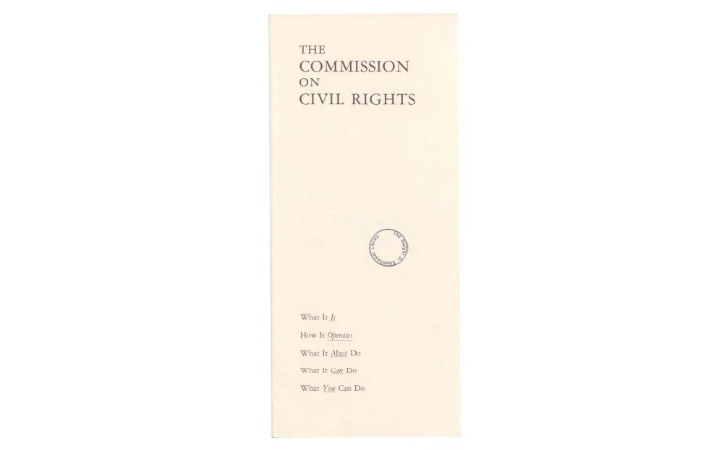 Part of the reason that RG 453 receives less attention has to do with the restrictions originally placed on many of the records. When accessioned by the National Archives and Records Service (NARS) - and later when the organization became known as the National Archives and Records Administration (NARA) - two primary restrictions were placed on nearly all records in RG 453. One of these restrictions may require a person to make a request under the Freedom of Information Act (FOIA) in order to view them.

The first is restriction 5 USC 552 (b) (6) - Personal Information, which pertains to records containing the personal information (like addresses and other contact information) of individuals that the Commission talked to. Although decades have passed since the records were created (rendering some of the restrictions regarding Personally Identifiable Information (PII) no longer applicable), it may be possible that notations of restrictions remain on the records and their containers. Hence, the records are required to undergo a screening process by National Archives staff in order to make any releasable information available to the public. 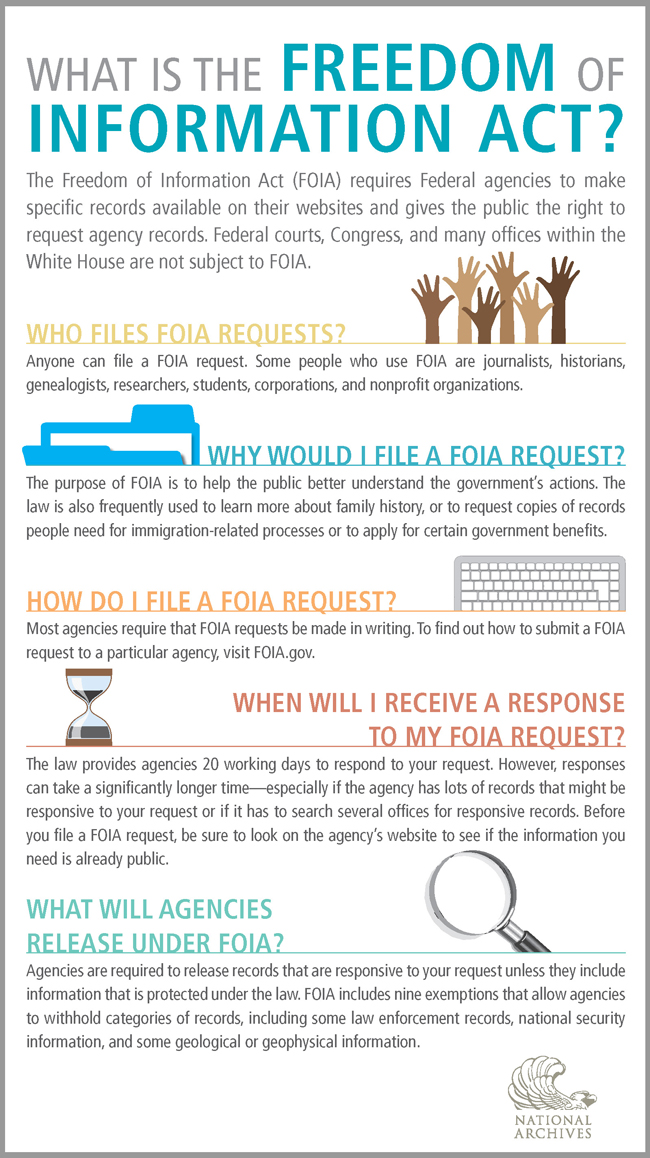 The second restriction that applies to some of the Commission’s records is 5 USC 552 (b) (3) - Statute: 42 USC Ch.20A, Sec. 1975a. Per this restriction, all proceedings from Executive Session Commission meetings are confidential and not available to the public. It is possible that Executive Session Commission meeting records are sometimes intermingled with other records that are usually open to the public. Hence, all require screening by NARA personnel for this restriction to ensure that information is properly released.

Another reason for the underutilization of USCCR records may pertain to the need for information from paper-based finding aids to be added to the National Archives Online Catalog. For example, until recently a search of RG 453 in the Catalog provided basic information only. Further details were not available. However, the closure of NARA research rooms during the COVID-19 pandemic in 2020-21 provided staff an opportunity to transcribe thousands of paper-only finding aids for the online catalog. This includes the finding aids for Record Group 453, Records of the United States Commission on Civil Rights. Over the coming months, most of this record group’s file lists will be available to search in NARA’s Online Catalog.

Before you contact the National Archives, it is first recommended that you research the U.S. Commission on Civil Rights website. USCCR’s website has two important links, the first of which is their Archives tab. Under this link are press releases dating back to 2010 under “Highlights'', “Commission News”, “State Advisory Committees (SAC) News”, and “Other”.

The second tab of interest is the one for Historical Publications, which forwards you to the Thurgood Marshall Law Library of the University of Maryland Francis King Carey School of Law page dedicated to the Historical Publications of the United States Commission on Civil Rights. These publications are the culmination of the Commission's work and are the reports that were presented to Congress and the American public to act upon. These reports are a great place to begin your research into the United States Commission on Civil Rights.

Once you have searched potential areas of interest and are ready to view original documents related to the Commission reports, your next stop is the National Archives Catalog. You may use a basic search or advanced search to parse through Record Group 453 and review series descriptions and/or individual file lists.

The Commission also interacted with every Presidential Administration since its founding. During your research, you will find some records that are only available at Presidential libraries. Therefore, your research on these records will begin at NARA’s Research Presidential Materials web page. 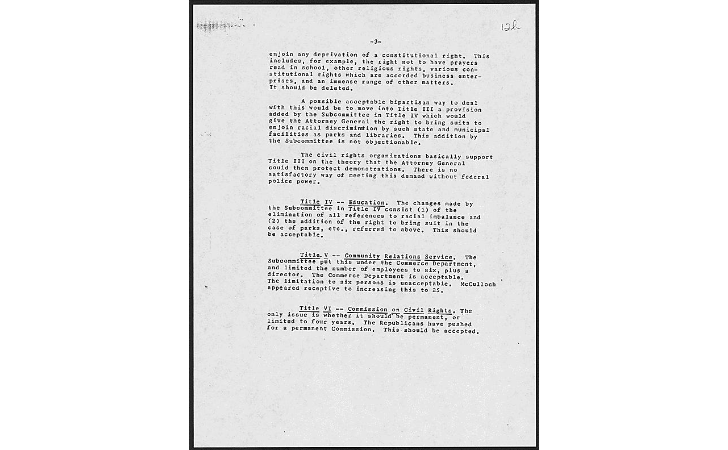 USCCR reports heavily influenced congressional legislation. Consequently, the records of the U.S. Senate and U.S. House of Representatives may provide a source of Commission documents and correspondence. The Center for Legislative Archives holds the historically valuable records of the U.S. Congress, including official committee records. To research congressional records and legislative history, start with the Center’s online search catalog or contact them directly at legislative.archives@nara.gov.

You may review records of general interest within RG 453. Publications, 1975 - 1996 (NAID 1112317) includes a variety of publications created both by the Commission and outside groups. Publications, Reports and Studies, 1973 - 1976 (NAID 1077448) is similar to NAID 1112317, but these records were maintained by the Chairman of the Commission on Civil Rights, Arthur S. Flemming. Lastly, Records Relating to Surveys and Studies, 1958 - 1962 (NAID 1142771) contains reports and other studies from the earliest days of the Commission.

Once you have determined the USCCR records you wish to review, you will need to visit the National Archives facilities in Metro-Washington DC. The Center for Legislative Archives is located at the National Archives building in Washington, DC. Records for the U.S. Commission on Civil Rights are found in the National Archives at College Park, MD. Please note: Due to COVID-19 facility closures and evolving arrangements pertaining to research, you should call or correspond with staff at each facility before visiting to be briefed on the status of current research and arrangements.

When you first arrive at the National Archives you are required to go through the process of obtaining a Researcher’s Card. You will watch a presentation which covers basic rules of how to properly handle records. Handling the records properly is important to help ensure that they survive over time and can be used by future researchers.

National Archives facilities located across the country may have different procedures for accessing certain records. Consult each facility's NARA web page for details on hours of operation and procedures for researching their records. 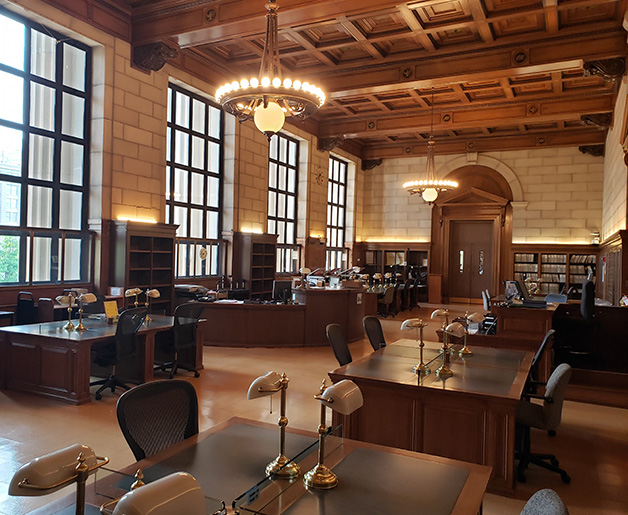 A view of the second-floor research room at the National Archives in Washington, DC.

You may use non-flash photography or your own scanner (provided it does not have a document feeder) to digitize documents. Photocopy machines are also available for use. The machines provide the options to scan your documents onto a thumb drive or print out paper hardcopies. Whatever method you use, copying costs 25 cents per page.

Once you have finished conducting your research, carefully return the materials to the Archives staff. Before you leave, all papers must be reviewed by NARA staff to ensure that record materials did not get inadvertently mixed in with the copies and dislocated from the files. Although your first day going through USCCR documents has ended, you are welcome to revisit the National Archives for further research.

This guide for USCCR records may pertain to other records at the National Archives. Hopefully, this examination of the underutilized records of the Commission encourages further examination, review, and research. The United States Commission on Civil Rights stands as an important Federal authority in the development of civil rights in the United States. Come and explore the history it helped to create at the National Archives. 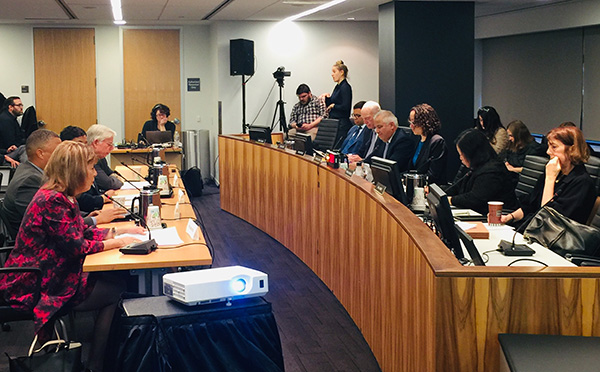 A United States Commission on Civil Rights hearing, “Federal Me Too: Examining Sexual Harassment in Federal Workplaces,” May 2019 which included a briefing from U.S. Rep. Jackie Speier.
Photograph from the Events USCCR web page.