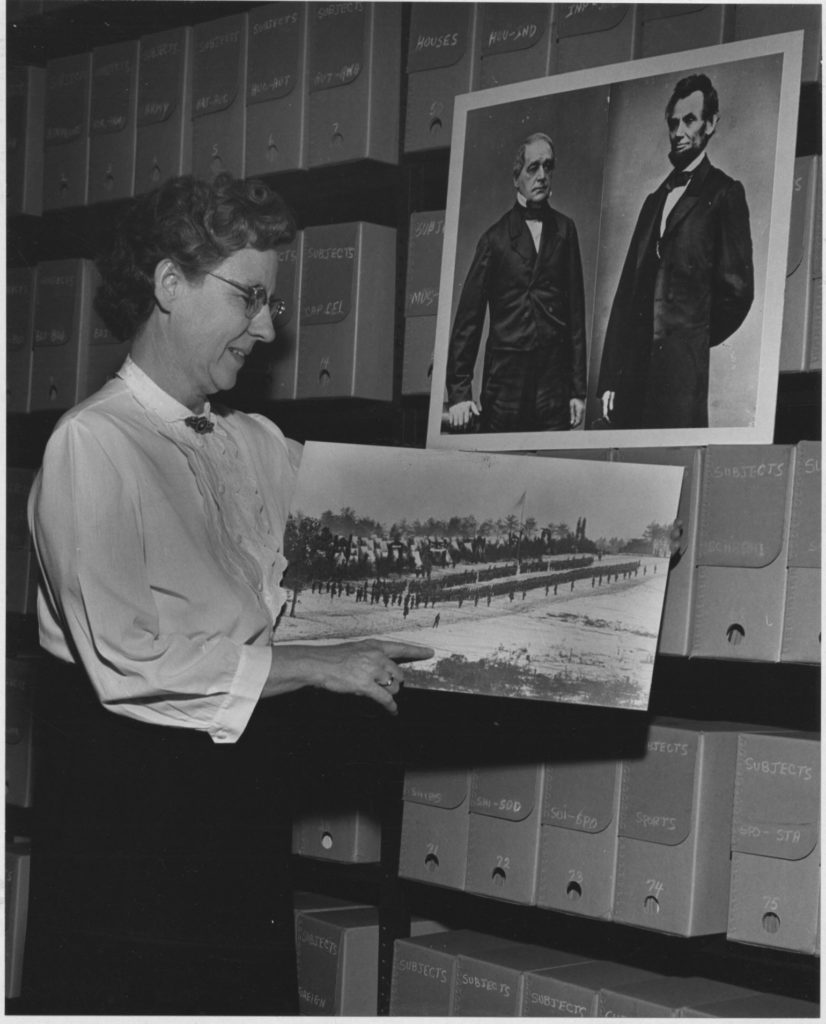 If you have a specific photo you are trying to locate and don’t have detailed citation information, there are a few things you can do to research where exactly the photo may be located. The Still Picture Branch houses roughly 17 million photographs–both analog and digital–which cover a wide variety of Record Groups. At the National Archives, Record Groups serve as a way to organize records into specific groups based on which Government Agency created, maintained, or arranged those records. In order to find any photos within our holdings, it helps to have an idea of which Record Groups to search.

In order to determine a Record Group (RG), the most important question you can ask yourself is “Why would the US Government have or produce these photos?” Think critically about the who/what/when/where/why, and see if you can pinpoint any US Government Agency and their involvement. That Agency will be the key to unlocking which Record Groups are the best places to search. Take time to explore the list of Record Group Clusters and Locations, and keep in mind not all units at NARA house records in each Record Group.

Sometimes you can even determine the best Record Groups to search based solely on what is depicted in the photograph you are searching for. The best way to analyze the photograph is to look closely, and try to determine what is happening in the photograph. Then, you can make your best guess about who might have been involved.

Now, let’s take a look at a few photographs and determine which Record Groups they may be within based solely on what we see in the photograph. We’ll point out a few important things to keep in mind as you look at a photograph when trying to determine a Record Group. 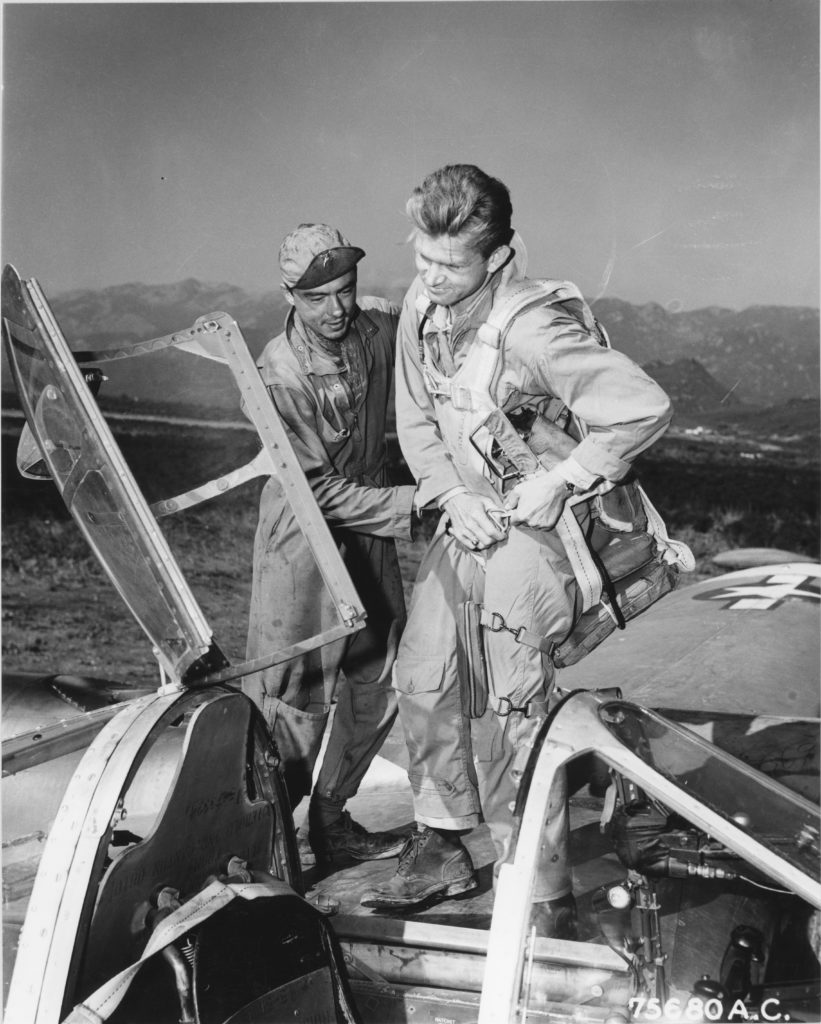 Without knowing too much about equipment or planes, we see a pilot being helped into the cockpit of an airplane. 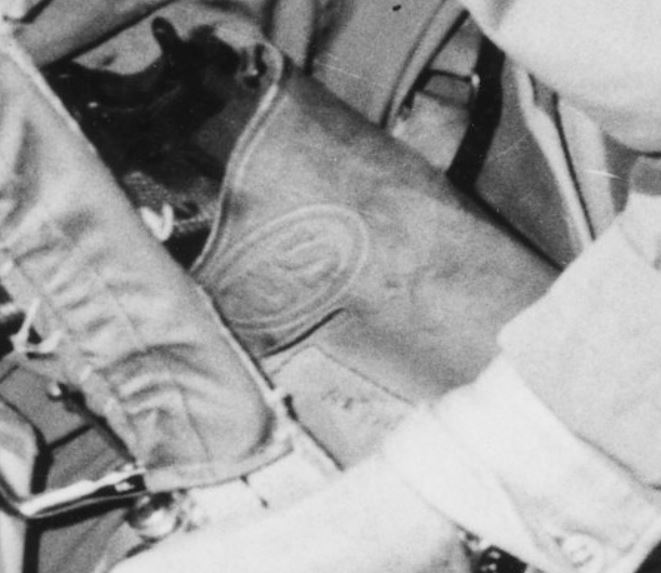 Luckily this photograph was scanned at such a high quality, if we zoom in on his equipment, we can even see a “US.” Perhaps this stands for “United States.” 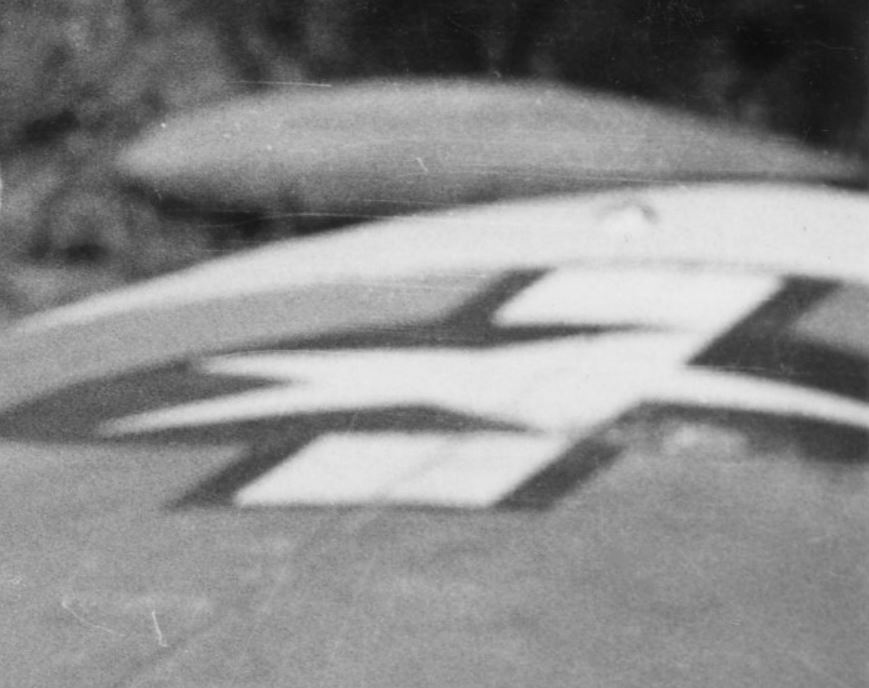 There’s also a marking on top of the plane itself, which could indicate what country the plane is from.

This photo likely served as a record of the operation of aircrafts either during wartime or during training. It recorded a moment of a pilot entering a cockpit and preparing for flight.

Since the image depicts a plane and pilot, we can narrow the Record Group to the “Air Force” section of the Record Group Clusters and Locations resource. The most likely Record Groups could be RG 18: Army Air Forces or RG 342: U.S. Air Force Commands, Activities, and Organizations. The Army Air Forces existed from 1941 to 1947, and turned into the United States Air Force in 1947, which still exists today. Therefore, RG 342 will likely have a larger body of records to review in order to find this photo, because the records in the Record Group date roughly from 1900-2003, while RG 18 dates from 1902-1964.

Record Group 342! The image identifier number is 342-FH-3A23400-75680AC, and was taken during World War II in Italy. You can find the photograph in the online catalog. 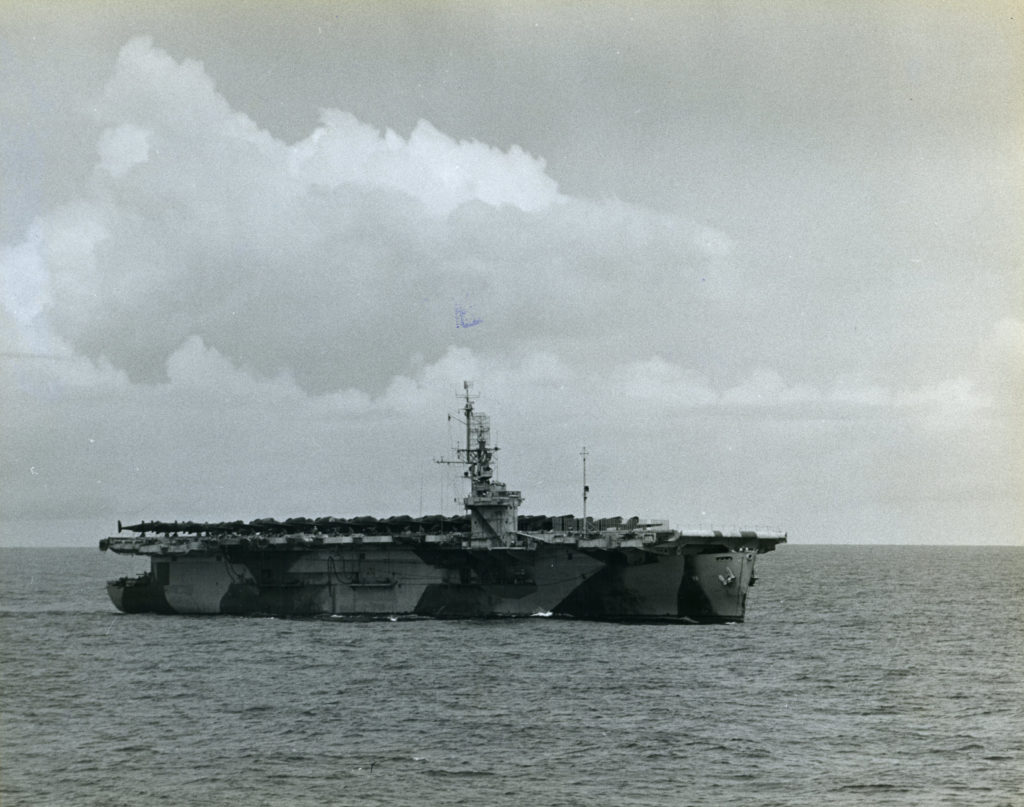 This photograph depicts a ship at sea. 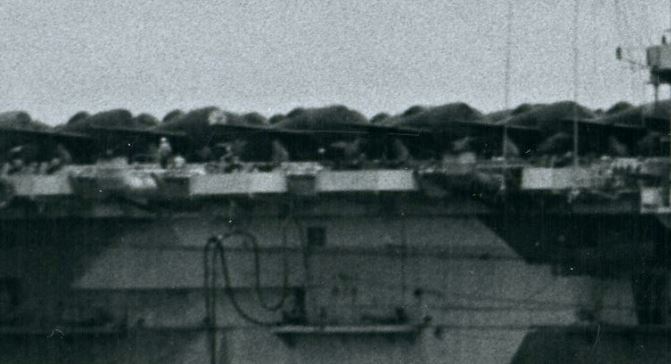 Not everyone is well-versed at the various types of ships, but after looking closely, it looks like there are planes onboard the top portion of the ship. This could mean the ship is some type of aircraft carrier or escort carrier. The planes appear to be older, given their shape and size. 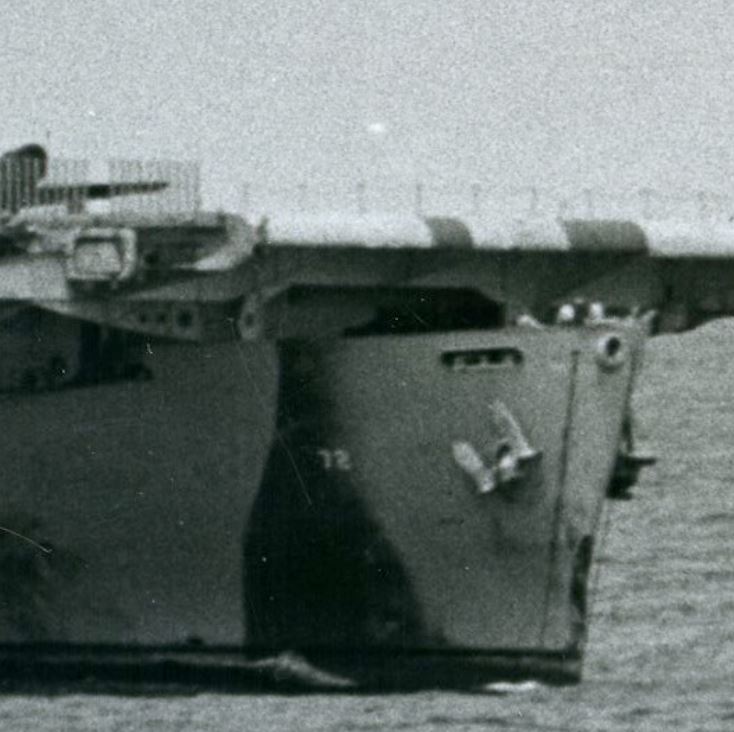 Also, after looking closely at the front of the ship, we can see the number “72,” which is likely the hull number, or ship identification number.

It was important to record a ship in action to understand its usefulness to the Navy at large. While this photo doesn’t depict a battle, it is possible this was taken at wartime to depict how a ship could transport a variety of equipment, and in this case, aircraft.

This photograph mainly depicts a ship at sea, so the most likely Record Groups clusters would be “Modern Navy” or “Old Navy.” Within those clusters, the most likely Record Groups appear to be RG 19: Records of the Bureau of Ships or RG 80: General Records of the Department of the Navy. Because the photo appears to be while the ship was in service, it may be useful to check RG 80 first, because those would be the general record of the Navy. Typically, RG 19 depicts ships when they are first built or under construction.

Record Group 80! The image identifier number is 80-G-364576, and the photo depicts the USS Tulagi (CVE-72). You can find the photograph on our online catalog. 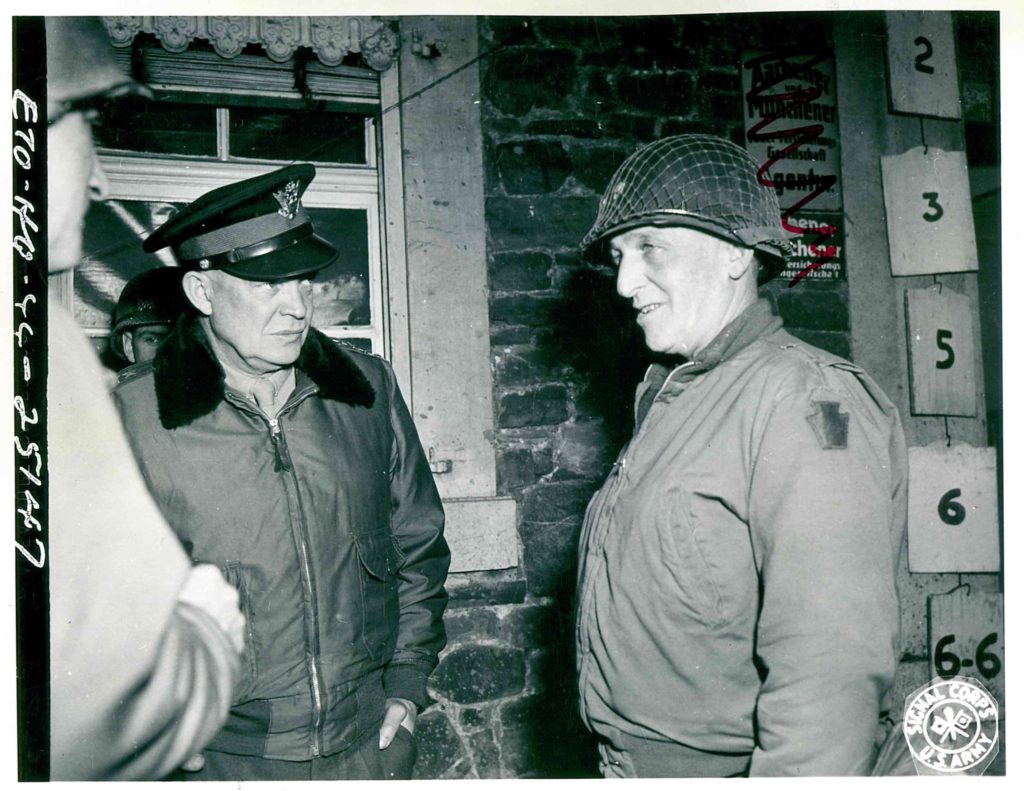 We recognize General Dwight D. Eisenhower in his uniform, speaking with another high-ranking Major.

If you look closely in the top right corner, you can see German writing. Paired with the uniforms of those depicted, it is possible this photograph is from World War II. 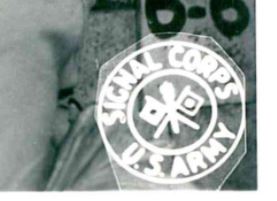 The biggest clue we can see is the emblem in the bottom right corner that reads: “Signal Corps. U.S. Army.” Moreover, General Eisenhower was a general in the US Army, which reinforces the idea that this image originated from the Army.

Given our biggest clue that the image is related to the Signal Corps, the most likely Record Group found under the “Modern Army” or “Old Army” heading of the Record Group cluster list is RG 111: Records of the Office of the Chief Signal Officer.

Record Group 111! The local identifier number for this photo is 111-SC-434297 and was taken by a Signal Corps photographer during World War II. You can find the photograph on our online catalog. 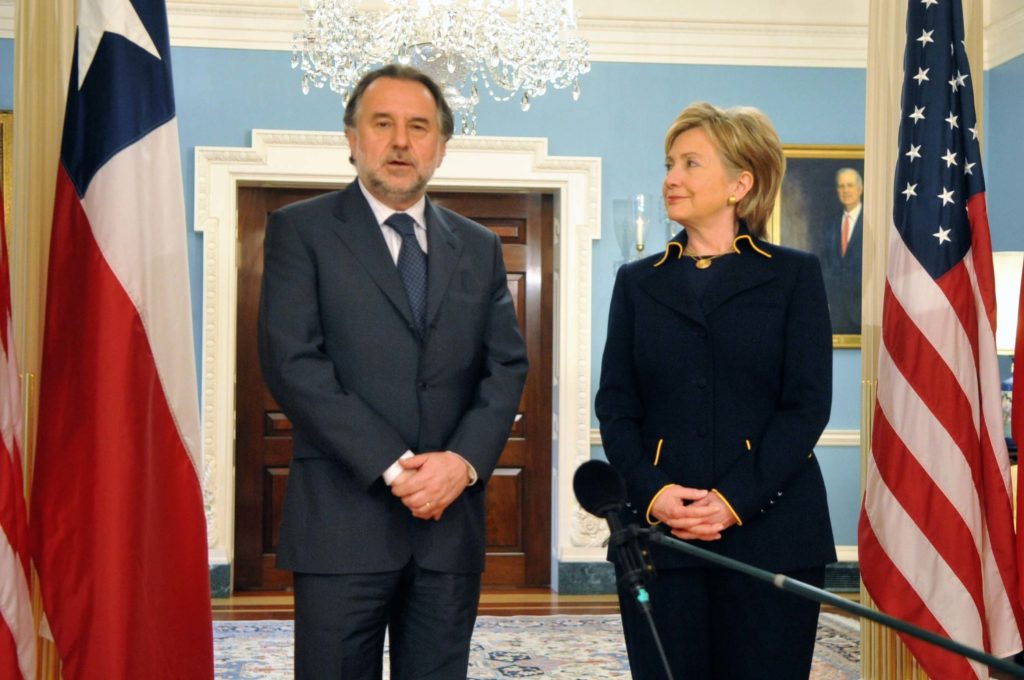 We recognize Hillary Clinton, and possibly also recognize Mariano Fernandez. If you do recognize him, you would know Fernandez served as the Minister of Foreign Affairs of Chile in the early 2000s. Then, it would be easy to place this photograph during Clinton’s time as the Secretary of State.

Even if we did not recognize Secretary Clinton or Minister Fernandez, we can see the design of the room is very ornate. In addition, we can note the Chilean flag as well as the United States flag, indicating which countries are represented in this photograph.

Luckily, the Record Group clusters list has an entire section dedicated to State and Foreign Affairs. Because this photograph depicts Secretary Clinton’s general meeting with a Foreign Minister, it is likely this image is within RG 59: General Records of the Department of State. In addition, while Barack Obama’s Presidential Library may house records related to his administration, since this photograph solely depicts Secretary Clinton’s meeting, it would be found in general State Department records.

Record Group 59! This photo is found within a born digital series under the local identifier 59-PAD-128-DSC_2011. You can find the photograph on our online catalog. 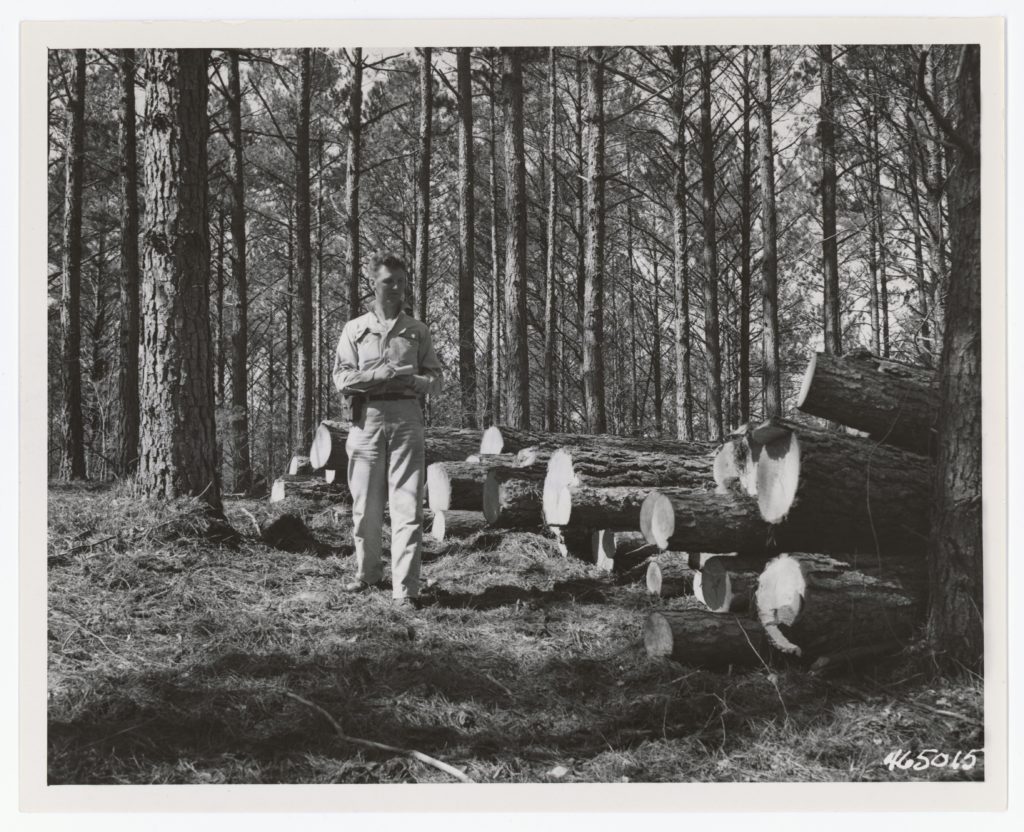 In this photograph we see a man walking alongside a pile of cut trees in a forest. 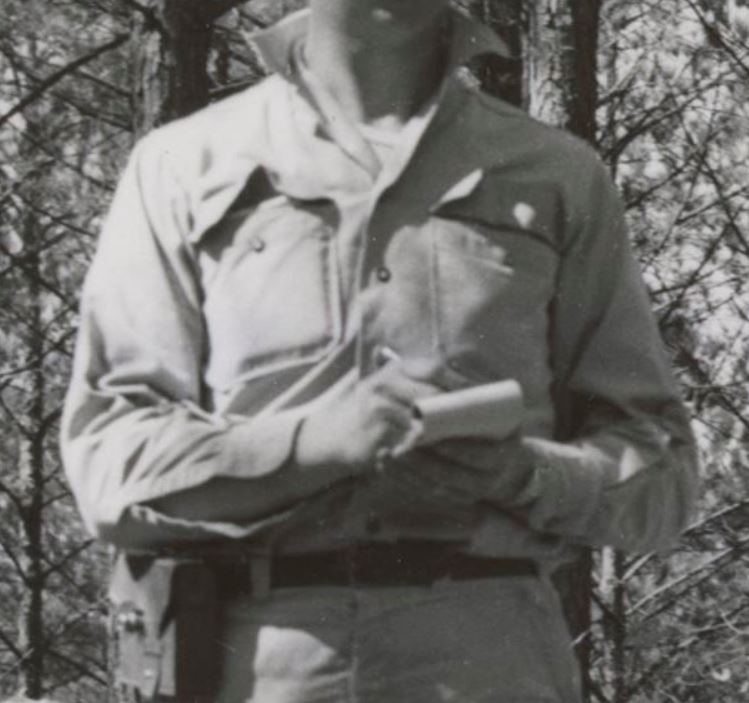 If you look closely, you can see he is wearing a uniform and writing on a pad of paper. He also is prepared for his work with a pouch at his side.

This photograph is difficult to say definitively that it was taken by a US Government agency because the subject matter can also be related to private, commercial efforts. However, due to the large areas of Government-owned land, this photograph could have been used to document the efforts to care for government land.

Because this photograph depicts a forest, it is likely related to the Agriculture section of the Record Group clusters list. While there are agencies related to specific functions, RG 95: Records of the Forest Service, relates the most to forest activities.

Record Group 95! This photograph depicts a forester at work in Alabama and is found under the local identifier number 95-GP-2-465015. You can find this photograph on our online catalog.

The photographs included in this post have no known copyright restrictions. If you have any questions about the images in this post or the holdings of the Still Picture Branch, please contact us at stillpix@nara.gov.

Generally, copies of photographic records held by the National Archives may be published without special permission or additional fees. The National Archives does not grant exclusive or non-exclusive publication privileges. Copies of Federal records, as part of the public domain, are equally available to all. A small percentage of photographs in our holdings are or may be subject to copyright restrictions. The National Archives does not confirm the copyright status of photographs but will provide any information known about said status. It is the user’s responsibility to obtain all necessary clearances. Any use of these items is made at the researcher’s or purchaser’s own risk.

Proper credit lines are encouraged in the interest of good documentation. They also help inform the public about government photographic resources that are available.

*Because so many of our requests for information cite credits and captions that appear in published works, the inclusion of a photo number in hard copy and electronic publications is of great assistance to both us and the public.

Examples of preferred credit lines are as follows:

If using a large number of our images, the National Archives will appreciate receiving copies of publications that contain our photographs. Such copies can be sent to the Still Picture Branch or the Library, National Archives and Records Administration.

You can also find this blog post on the Unwritten Record.