NARA expects to digitally release the 1950 population census schedules for researcher use on April 1, 2022, which is 72 years after the official 1950 census day.  This is the 23rd in a series of blog posts on the 1950 census.

6.18 miles.  That’s how much paper there was.  When the enumerators finished their work, all of the Forms P1, 1950 Census of Population and Housing, were sent to Census Bureau headquarters in Suitland, Maryland, a suburb of Washington, DC.  There the data was tabulated, analyzed, and published in many formats.  The paper P1 forms took a massive amount of space:  32,000 cubic feet.  The image below shows a modern cubic foot box: 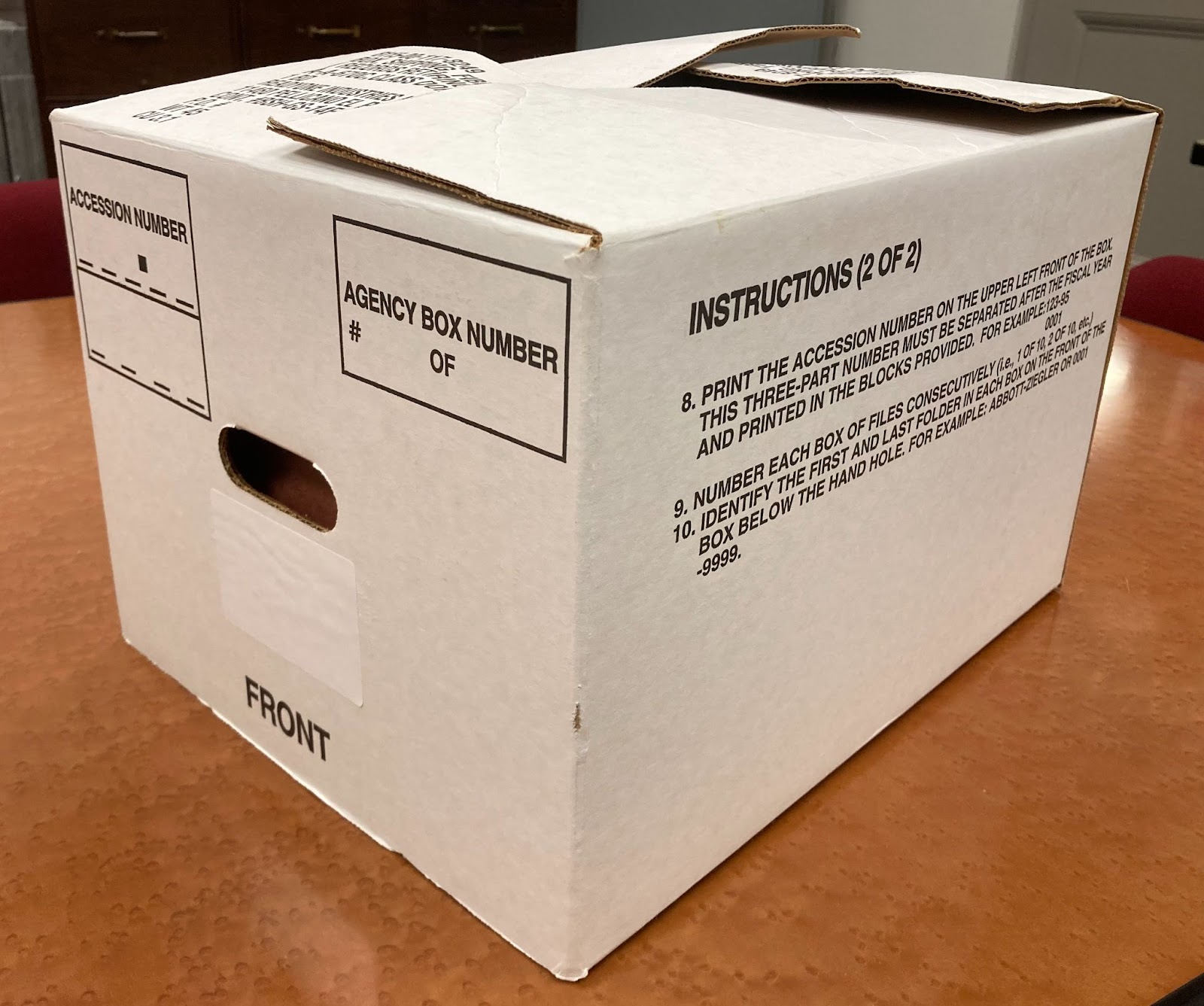 In 1952, Census Bureau technicians microfilmed the population information on the front side of the Forms P1, 1950 Census of Population and Housing.  This is the microfilm set now known as NARA Microfilm Publication T628, Seventeenth Census of the United States, 1950 (6,373 rolls), that will provide the bulk of the records for the 1950 census release on April 1, 2022.  Instead of 32,000 boxes of paper, the 6,373 35mm microfilm rolls would fit in 79 modern cubic foot boxes (assuming 81 rolls per box).  That’s a huge difference in the amount of physical space.  The cost of microfilming was estimated at about $72,000 (1952 dollars) for the camera original negative plus one positive copy – or about $738,193 today (2021 dollars).  The image below shows a target (identification) sheet that begins each microfilm roll:

When the 1950 census was microfilmed in 1952, however, an entirely different approach was taken.  The P1 forms were apparently filmed in the order in which the Census Bureau was done using them for data tabulation purposes.  Thus, Autauga County, Alabama, ended up on Roll 2492 instead of Roll 1 where one would have traditionally found it.  A state-by-state “county level” view of the microfilming “order” was provided by the Bureau of the Census to the National Archives as the “Index to the Microfilm of the 1950 Decennial Census” (National Archives Identifier [NAID] 196015600), of which the first page for Alabama is shown below: 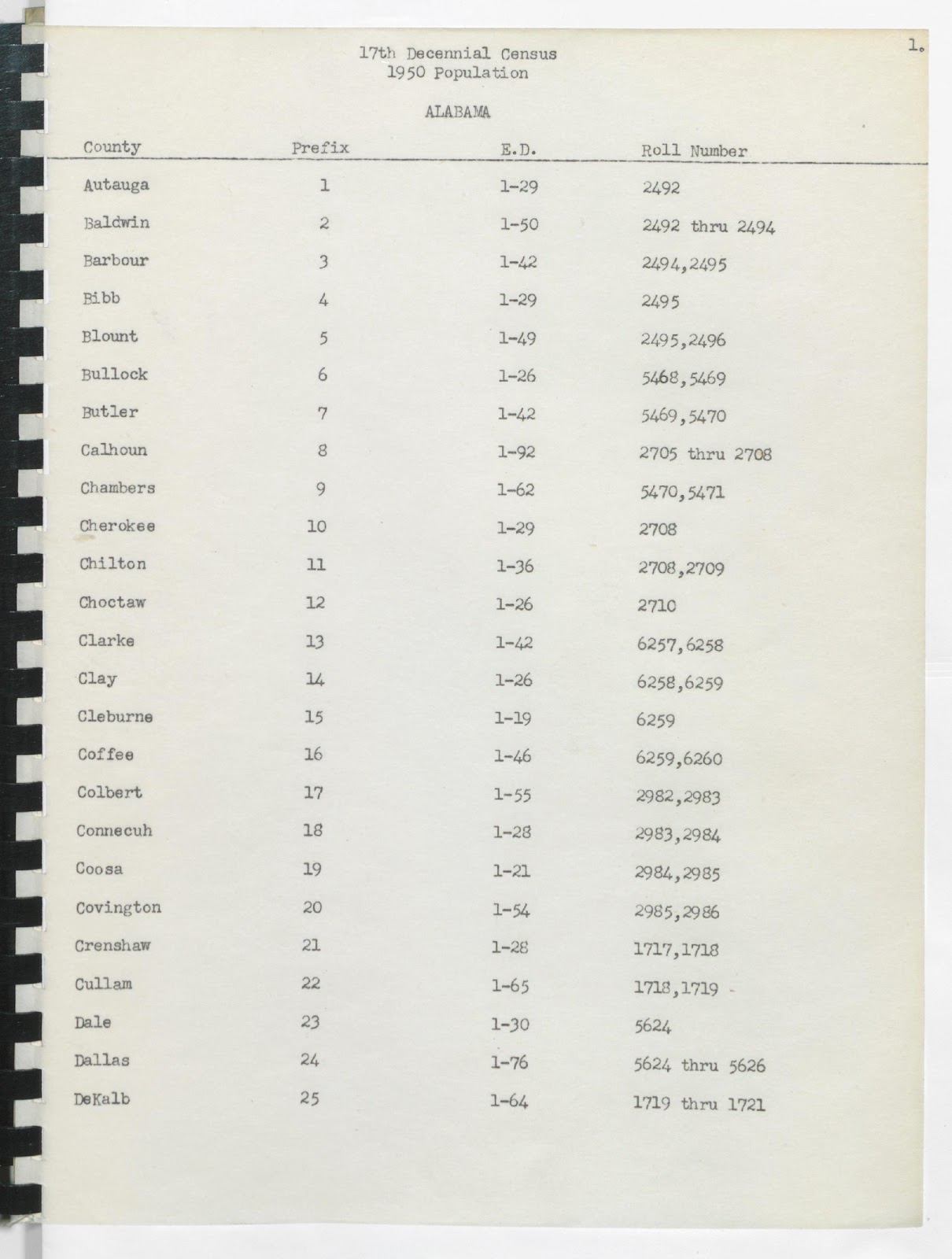 Most 1950 census microfilm rolls have a few EDs from one county, and then another, and then another, and so forth, often from different states.  There is no coherent order.  Fortunately, researchers won’t need to know what “microfilm roll” to look for when the census opens for public use on April 1, 2022.  Part of NARA’s preparation includes identifying the order in which each Enumeration District appears on each roll of microfilm and identifying all of the images (pages) for each ED.  The special NARA website dedicated to the 1950 census will enable researchers to search by state, county, ED numbers, and possibly in other ways.  (The URL for the website will be announced at at later date.)

The Census Bureau did not microfilm the housing data on the reverse side of the Form P1, 1950 Census of Population and Housing.  If the reverse side had been filmed, the number of microfilm rolls would have doubled to 12,746 rolls.  In 1961, the National Archives approved the destruction of the original paper 1950 census forms because “the essential value of the population schedules are preserved” on microfilm “and the data contained on the housing schedules are adequately summarized in publications of the Bureau of the Census.”  Due to the confidential nature of the census schedules, the housing data could not “be used by nongovernment researchers for further analysis” for many decades and it was thought that “by the time the schedules could be made available to scholars, the information about individual dwellings would have insufficient value to require the retention of these records,” according to NARA Disposition Dossier II-NN-3467 (NAID 7461357).  Certain collections of P1 forms that the Bureau retained in 1961 for further studies were disposed in 1963, according to NARA Disposition Dossier NN-163-128 (NAID 7461357).  Thus, the paper P1 forms came to the end of their lifecycle.