May 2019 Previous month Next month

Today By the People is launching the Activity Prototype! Test out a new way of browsing pages and finding something to transcribe or review. In this interface volunteers can:

Below are detailed instructions to help you get started. This new functionality will be available through the end of July and we want to hear from you! Can you tell us more about the ways this experience makes tasks easier or harder than they were before?

Try it out and let us know what you think by filling out this survey.

How to get started:

First, you will need to log in or register.  Then jump in on the home page or go to crowd.loc.gov/act.

Start by choosing what you want to do - “Transcribe” or “Review”, by clicking on one of these buttons in the top left of page. Then look for a page that looks interesting to you! You can also choose an option from the “Sort by” drop down list to group images by “Most Recently Updated”, “Most Difficult”, and “Year”. Use the campaign drop-down menu to view one campaign at a time. You can use one or more filters of your choice.

Adjust the size and number of pages you see using the slider at the top right. Once you see something you want to work on, click it.

Find resources to help you transcribe or review under "More info" and the "Help Panel".

Click “More Info” above the text window to see more context about the page and the larger collection of which it is one part. The context can help you decipher significant names, locations, and dates and includes broader campaign and project information.

Click the ? tab to the right to open the help panel. Here you will see basic transcription and review tips, a link to the complete instructions in the "Help Center", and keyboard shortcuts for the image viewer.

In review, carefully compare the transcription to the original page and check for accuracy. Click “Accept” if accurate or “Edit” if the page needs correction. Clicking “Edit” will move the image back into transcribe mode so another volunteer can make the needed changes.

If you are transcribing, click “Save” as you go to save your work in progress. It’s ok to transcribe only part of a page, “Save”, and move on. Click "Save" and “Submit for review” when you have completely transcribed the page.

Choose another page to work on at any time in the right hand panel. Don’t forget to save before navigating away from your current page!

A message with a person icon will appear over pages you are unable to work on. This might indicate that someone else is already working on that page or that you have already worked on it.

To go back to view and filter all pages click “Browse All” in the top right corner.

To transcribe or review in the original interface, click on the image number

Try it out and let us know what you think by filling out this survey.

Final Update: Our original 500-page review goal was well exceeded by Memorial Day morning!! Incredible work! We issued a stretch goal for the final day of 750 completed... and hit it out of the park too! Final totals as of 10am ET the following morning:  862 pages completed!

Thank you immensely to everyone who participated.  We are still eager to hear about what you learned from the men who entered the Left-Hand Penmanship Contest.  Share your stories here!

In the lead up to Memorial Day (May 27) we challenge you to “Make It Meaningful” by completing review of 500 pages of “Civil War soldiers: disabled but not disheartened” campaign in honor of those who have served.

This campaign features entries from the left-handed penmanship competition created by William Oland Bourne for Union soldiers who lost their right hand or arm during the conflict. The handwritten pages include reflections on war and loss. Without transcription the digitized images of the original documents are not keyword searchable or accessible for many users with sight or cognitive disabilities. Focusing on review this Memorial Day offers you the opportunity to honor the sacrifices of service members by exploring and meditating on these soldiers’ experiences and helping make them accessible for others.

"There are many men now in hospital, as well as at their homes, who have lost their right arms, or whose right arm is so disabled that they cannot write with it. Penmanship is a necessary requisite to any man who wants a situation under the government, or in almost any business establishment. As an inducement to the class of wounded and disabled soldiers here named to make every effort to fit themselves for lucrative and honorable positions, we offer the following premiums..."

Thus began an announcement in the June 1865 issue of “The Soldier's Friend,” a newspaper edited by poet and reformer William Oland Bourne that focused on the needs and interests of Civil War veterans. The ad invited Union soldiers and sailors who lost use of their dominant arm during the Civil War to submit penmanship samples in competition for a monetary prize. Bourne served as a chaplain at Central Park Hospital during the war, where he was exposed to the often debilitating injuries sustained by soldiers and sailors. Winning entries were displayed in New York and Washington to advocate for the capacity and resilience of disabled veterans. The writings tell the individual veteran’s stories of service and sacrifice and were used by Bourne to advocate for the injured soldiers' value and experiences in post-war society.  Learn more about Bourne and the contest here.

And speaking of learning more, we have a special Challenge blog post by Michelle Krowl, a historian in the Manuscript Division. It tells the story of Alfred D. Whitehouse, one of the soldiers who entered Bourne’s penmanship contest twice. This post was written to inspire you during this challenge, and as a way for us to mark and reflect upon the significance of Memorial Day. What other stories can you find in this campaign?  Or in the Letters to Lincoln or Clara Barton Diaries?

We'll start the clock at 9am ET May 20 and will track review and completion progress here. Can we review 500 Left-Handed Penmanship Contest pages by the end of Memorial Day? Jump in!

(the below post is reproduced from the Library of Congress blog)

Michelle Krowl, a historian in the Library’s Manuscript Division, recently was working with Barton’s diaries in “Clara Barton: ‘Angel of the Battlefield,’” puzzling over a blurred name. For those of you drawn to such literary mysteries, and who might be intrigued to try your hand on the project, here’s a story of her detective work. Share your By the People stories with us, too!

I recently delved into Clara Barton’s diaries and stumbled across the kind of puzzle that makes my work so fascinating. My story might help you, as a kind of a how-to, in using the Library’s resources in your own research.

It began when I was looking into Elizabeth Brown Pryor’s biography, Clara Barton: Professional Angel. The task at hand was to determine if Pryor used Barton’s diaries to help document Barton’s work following the Sea Islands Hurricane of Aug. 27, 1893, which devastated South Carolina. Yes, it turned out: Pryor cited several dates, and quoted from Barton’s diary entry of October 1, 1893. 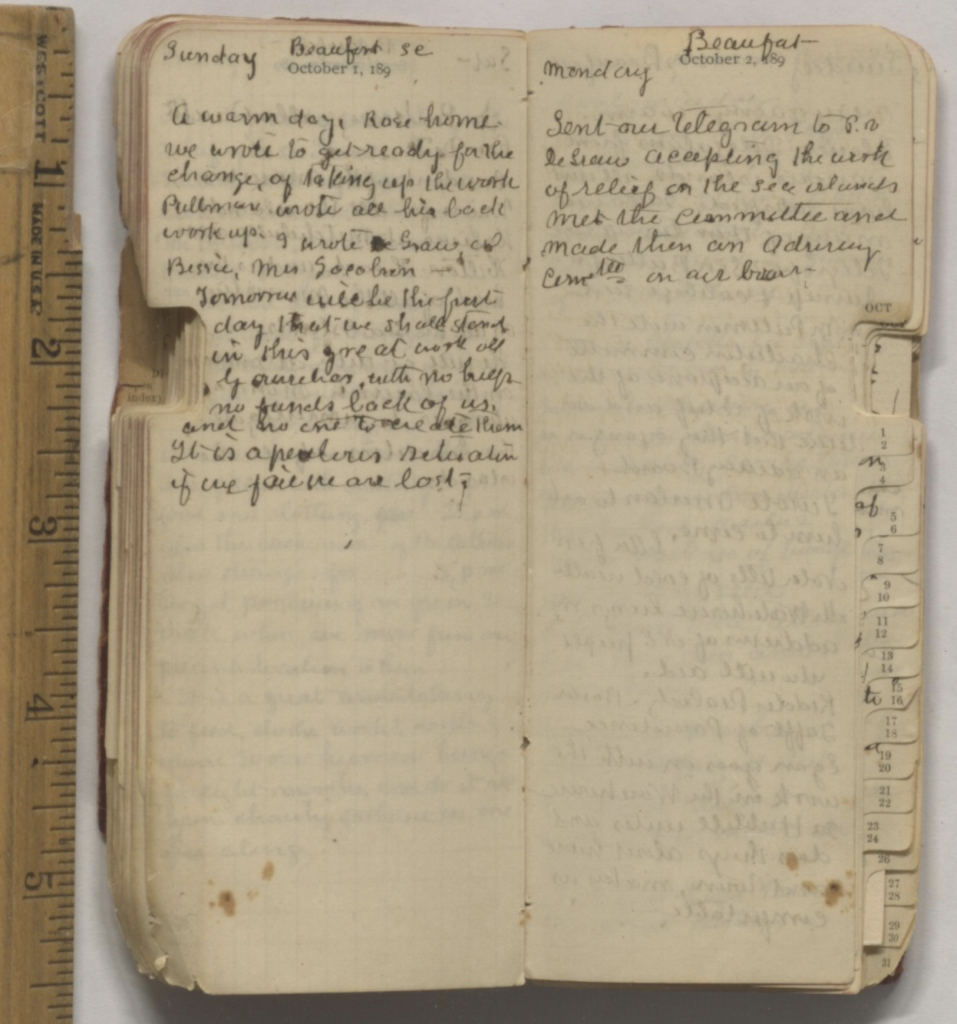 On the project site, I noticed a volunteer had completed most of that Oct. 1 entry, and correctly added brackets for words that were illegible or speculative. Since several brackets overlapped the quotation supplied by Pryor in her book, I added the missing words to the transcription.

Then curiosity took hold. I looked at the other doubtful words. At least one was a name, which the original transcriber reasonably speculated was “Grace.”

On the next page, though, in a sentence that reads, “Sent our telegram to…” the same name now looked more like “De G—-.”

I was intrigued. I wanted to make that identification. But how could I find the name?

First, I turned to the Clara Barton Papers, available online through the Manuscript Division.  I looked in the General Correspondence series, which is arranged alphabetically by the name of the correspondent. Scanning the “D” names in the collection finding aid, I got a hit: “DeGraw, Peter V.”

Ideally, for confirmation, in the “DeGraw, Peter V. and Emma” file, I would find a letter to Barton beginning, “I received your telegram of October 2….” That would have sealed the deal. Alas, this was a dead end. There was no such letter.

Still, I kept looking, and I discovered something nearly as good. Years earlier, in 1888, DeGraw had written a letter to Barton. On the back of it, Barton noted, “P. V. DeGraw,” in script that looked convincingly similar to her later diary entry.

That was good, but not quite proof positive.

So, next, I went back to the Barton Papers. I consulted the Letterbook series, which contains copies of letters and memoranda, written by Barton and other Red Cross officials. It is arranged chronologically.

The June 1892-January 1894 volume was promising. An index at the front listed the page numbers of DeGraw correspondence, helping me hone in quickly. And there, on page 502, the mystery was solved. A copy of an Oct. 2, 1893 telegram sent by Barton to “P. V. DeGraw,” notified him that the Red Cross accepted responsibility for Sea Islands relief work. 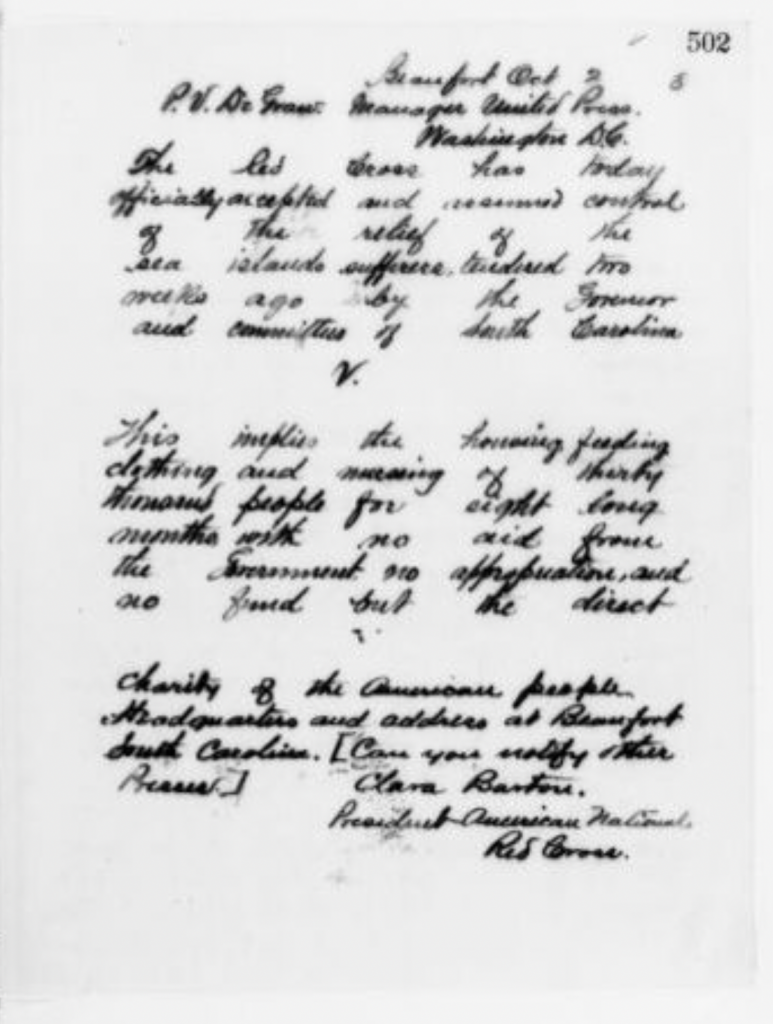 The telegram includes Barton’s prediction that the work would involve meeting the needs of “thirty thousand people for eight long months with no aid from the Government,” which later accounts suggest was not far from the reality.

That was it. I had my mystery solved. I added in the name to the transcript, delighted.

I was not quite done, though. Barton’s own writings helped interpret another mysterious word in brackets… the final word on October 2:

The transcriber recorded the last two words as “all [  ].” Could I solve that, too?

Barton, I knew, published books on her life and the work of the American Red Cross, so I again consulted the Barton Papers online. First, I went to the Related Resources page, and looked under the “selected Barton publications” list. The Sea Islands relief work comprises an entire chapter in “The Red Cross in Peace and War.” Reading that, I noticed that a passage on page 202 suggested a possible interpretation: “…the Beaufort Relief Commission, as appointed by the governor, was formally released as a committee and immediate re-elected by the Red Cross as its ‘advisory board’….”

Could “all [ ]” actually be “our board.” hurriedly written in a small pocket diary? I think so, but the reviewer of my addition to the transcription will be the judge.

So, to sum up: Through the efforts of previous transcribers, my consultations of the collection finding aid and the Barton Papers, plus Barton’s own writings, the diary entries for October 1-2, 1893, may now be complete.

This might seem like a considerable effort for a short text. But I hope that this example of using numerous parts of the Barton collection to solve its mysteries might help other transcribers understand the context in which Barton wrote about her relief work, and offer ideas about how to track down the people and groups who were part of her universe.

Plus, who are we kidding? The detective work is fun!