Federal Courts in the United States have played a pivotal role over the decades on the matter of equal protection rights for the Lesbian, Gay, Bisexual, Transgender, Queer and/or Questioning, Intersex, Asexual and/or Ally + (LGBTQIA+) community. The U.S. Courts are responsible for hearing cases that question the applicability and the limits to rights afforded under U.S. law. Specifically, members of the LGBTQIA+ community used the Court to redress issues of equal protection, discrimination, and unfair application of law.

There are a number of key Federal Court cases regarding the equal protection rights of the LGBTQIA+ community. Some cases expanded rights, while others curtailed them. One, Incorporated v. Otto K. Olesen, et al. and James Michael McConnell v. Elmer R. Anderson are two cases that represent both outcomes. Portions of their cases are digitized and available in the National Archives Catalog. These two cases are just the tip of the iceberg for the kinds of Federal Court records available from the Records of the Supreme Court (RG 267) , Records of the U.S. Court of Appeals (Record Group 276), and Records of the District Courts of the United States (RG 21), at the National Archives.

Search for digitized case files in the National Archives Catalog by entering the case’s party name(s) and/or name variations. If the search is unsuccessful, determine where the case would have been filed (e.g., U.S. District Court for the Central Division of California or U.S. Court of Appeals for the Eighth Circuit). Using the court location, contact the facility where the records are located for further assistance. Researchers can learn more by visiting the National Archives guide to court records. The National Archives does not have a nationwide master list of case files by name, type, or content.

In 1953, the Los Angeles chapter of the Mattachine Society began to publish ONE: The Homosexual Magazine, considered the first magazine widely-distributed for the LGBTQIA+ community. Postal authorities in Los Angeles, California, seized the October issues of the magazine citing that it violated Federal obscenity laws. In response, One, Incorporated sued Postmaster Otto K. Olesen in the U.S. District Court for the Central Division of California. One argued that the magazine’s content was in fact lawful and should not be withheld for delivery by the U.S. Post Office. The District Court supported Olesen’s decision about withholding the content that he viewed as lewd. Later, the U.S. Court of Appeals for the Ninth Circuit (241 F.2d 772) upheld the lower Court's decision on February, 27, 1957.

On January 13, 1958, the Supreme Court quickly reversed the decision of the Ninth Circuit without any oral arguments based on its earlier decision in the case Roth v. United States, (354 U.S. 476 (1957)) that provided a new test to determine if something was unlawfully obscene. This reversal meant that pro-LGBTQIA+ writing was not per se obscene. 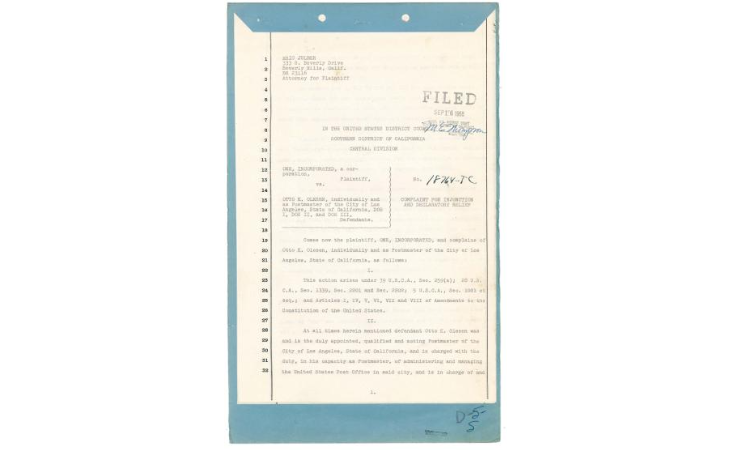 Michael McConnell and Jack Baker of Minnesota became the first same-sex couple to legally marry in the United States, on September 3, 1971.

These efforts by McConnell came at a professional cost, as his activism was used as justification by the Board of Regents of the University of Minnesota to deny his promotion to lead the Cataloging Division of the University’s St. Paul campus library.

And while McConnell and Baker lost their cases to establish equal protection rights in employment, their efforts can be seen in the digitized Appellate Case File and Briefs and Appendices from the litigation in the U.S. Court of Appeals for the Eighth Circuit. 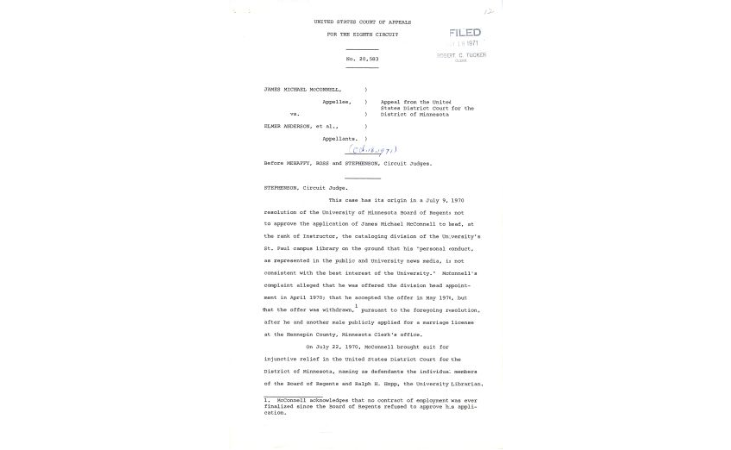 The struggle for equal protection rights for the LGBTQIA+ community has experienced many ups and downs over the decades, especially in the Federal Courts of the United States. One, Incorporated v. Otto K. Olesen and James Michael McConnell v. Elmer R. Anderson demonstrate both the successes and failures of that struggle. These two cases are just a small portion of Federal Court cases involving LGBTQIA+ matters available for researchers online and at National Archives facilities across the country.