(Authors note: the following post discusses, in part, death related records of individuals along with examples.)

Nearly 99 years ago, on October 10, 1922, Hairy Moccasin, a farmer on the Crow Reservation and one the then last living Custer scouts, passed away from tuberculosis. 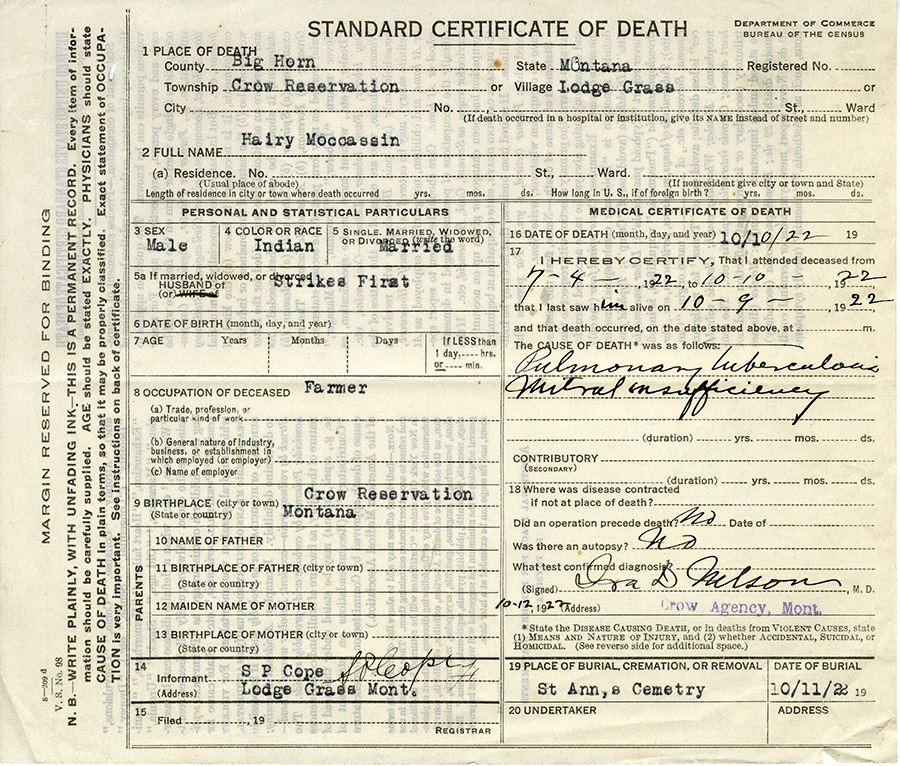 We know this because the National Archives holds Hairy Moccasin’s death certificate, among other records documenting his life which can be read about here. In the 1920’s the Office of Indian Affairs (OIA) was working in cooperation with the U.S. Census Bureau to track Native birth and deaths, so certificates were to be generated for both and forwarded to the OIA headquarters for consolidation, before being sent to the Census Bureau. This was not a big departure for the agency; it had been compiling such data in volumes for several decades by that point. This is a unique aspect of Record Group 75: Records of the Bureau of Indian Affairs holdings here at the National Archives. Typically vital records, those documenting the birth and death of individuals, are not found in the National Archives, as said records are created and maintained at the state level. Given the Bureau of Indian Affairs responsibilities in administering tribal reservations, the records often depart from the typically dry bureaucratic nature of federal records and can often be used to track individual’s lives.

WHAT RECORDS ARE THERE?

What birth and death records exist depends greatly both on the dates of the event and what reservations they were living on. The earliest records were bound registers into which births and deaths were noted. 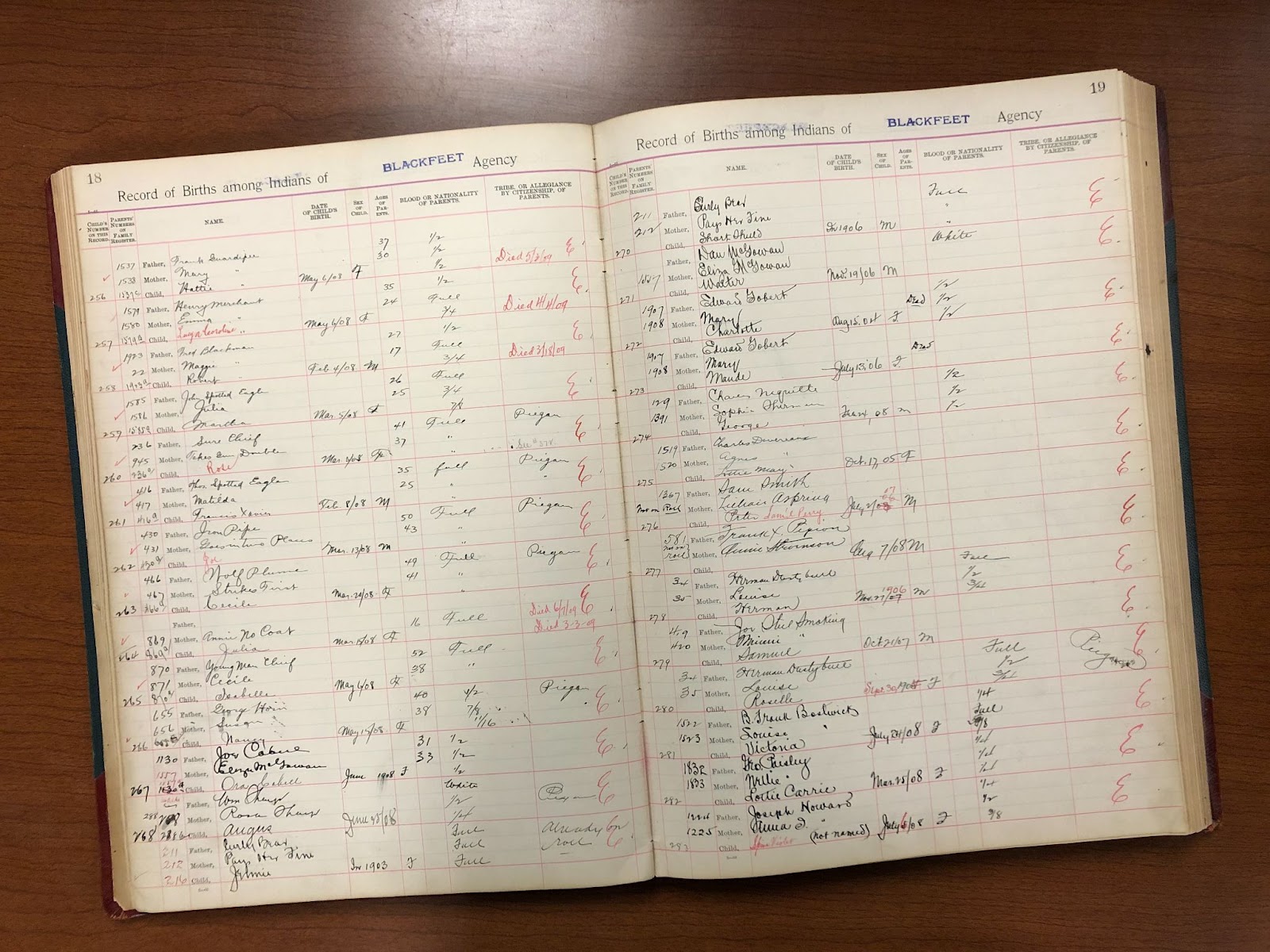 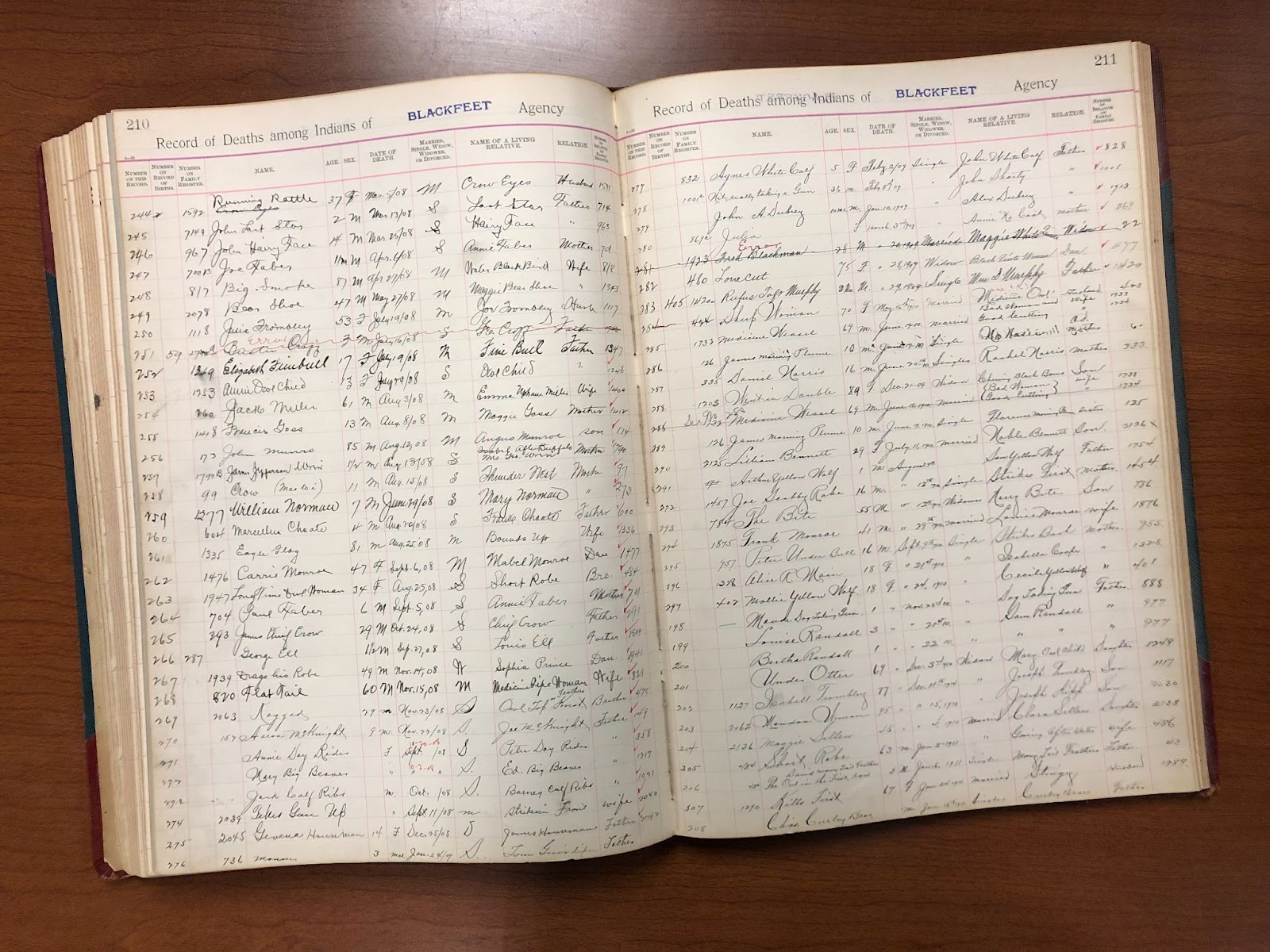 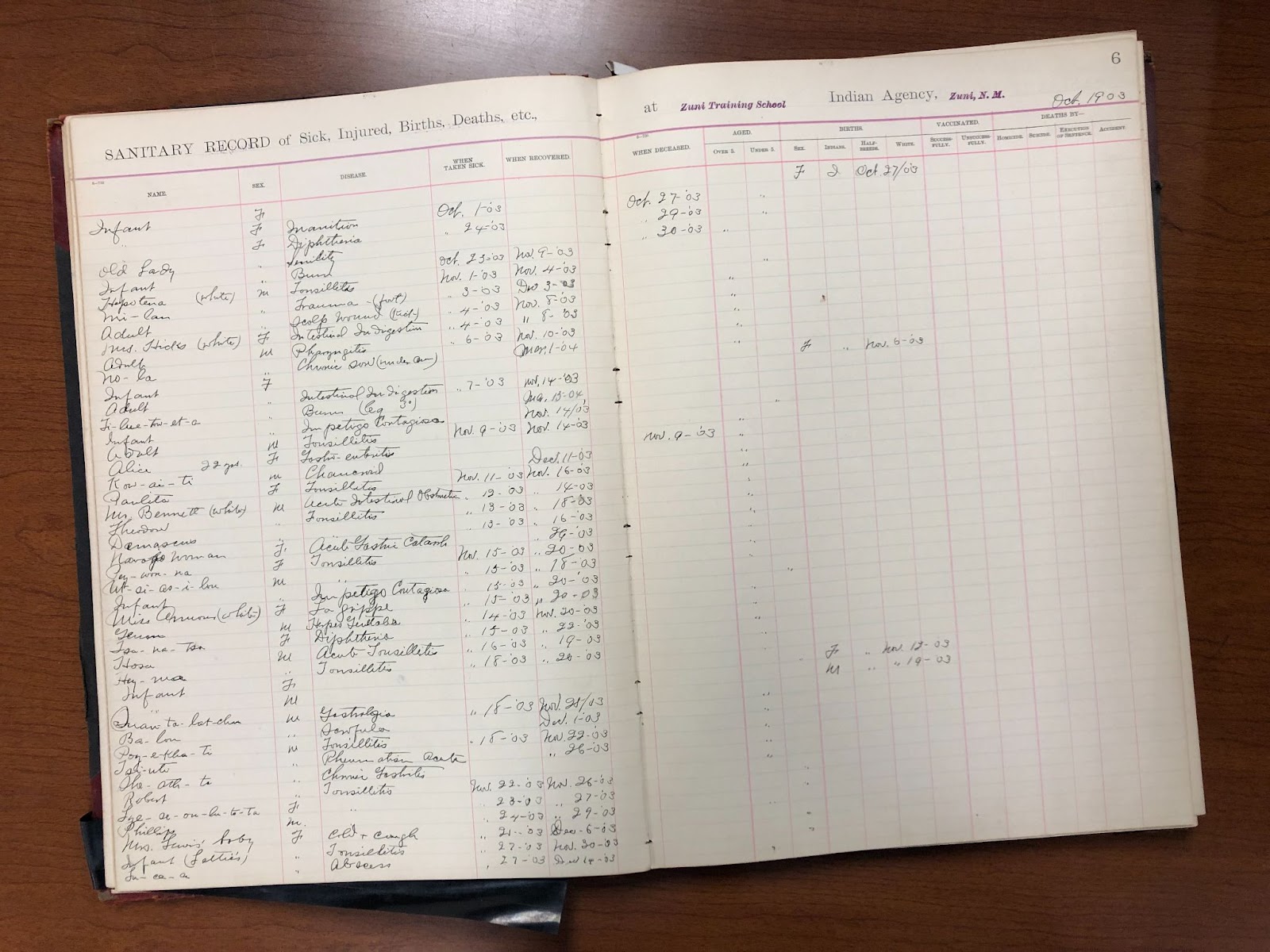 In some cases births, deaths, and illnesses were noted together in one volume - often in hospital records compiled by the agency physician. These pages from a 1903 sanitary record note children taken sick at the Zuni Boarding School and if they recovered. (National Archives Identifier 1367071)

The registers begin to fade out in the 1910’s, and soon after certificates start to emerge in the records. These early ones appear to be those filed with the state where the event occurred and a copy saved by the agency. As early as 1923 the OIA began working with the Census Bureau and researchers start to see one of two forms: the state certificate or a generic Bureau of Census one. 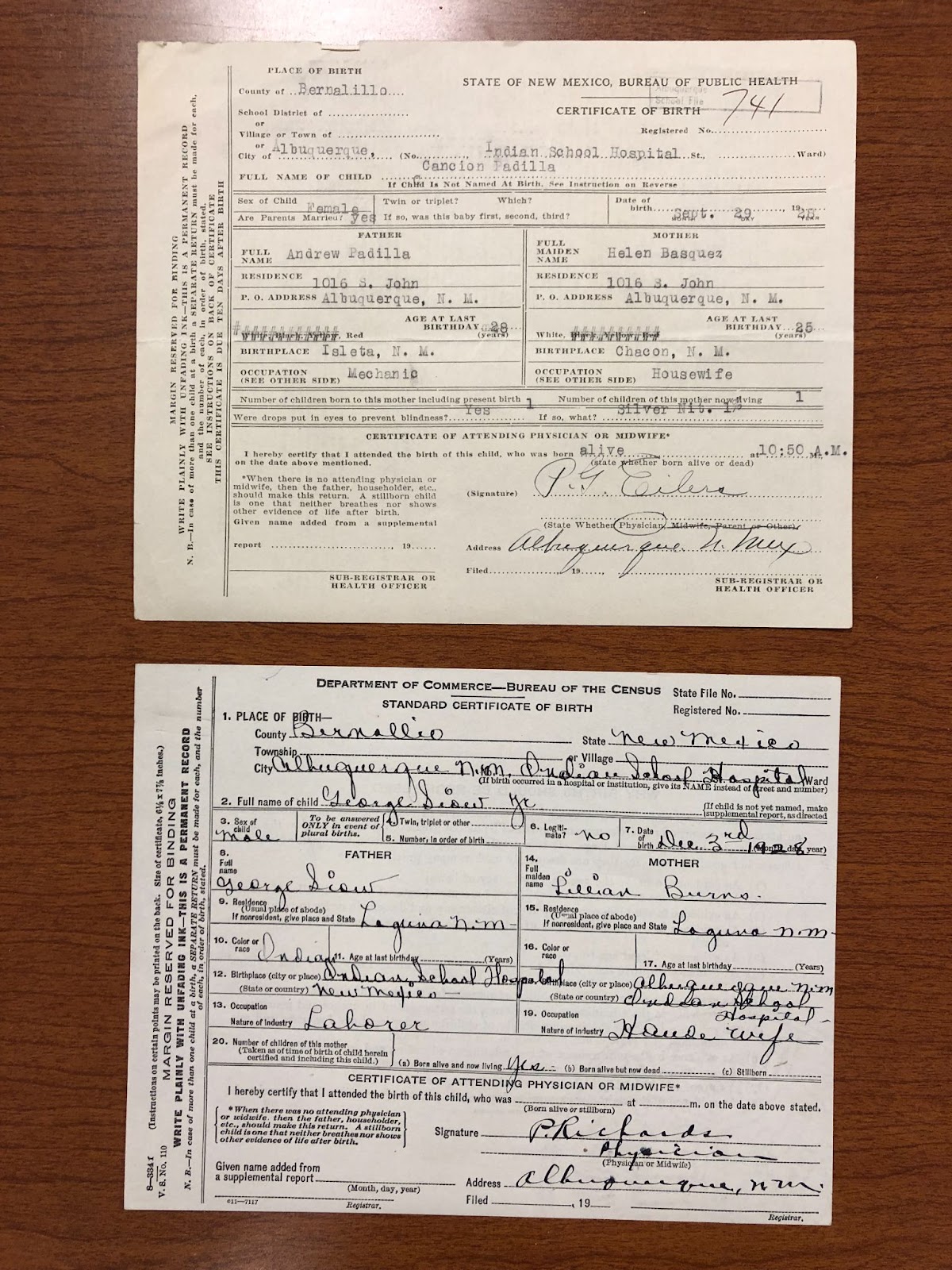 Here are two examples of birth certificates from the Albuquerque Indian School. Agencies would either have registered the event with the state, seen here with the New Mexico Bureau of Public Health’s Birth Certificate, or used the Bureau of the Census Standard Certificate of Birth. (National Archives Identifier 292863) 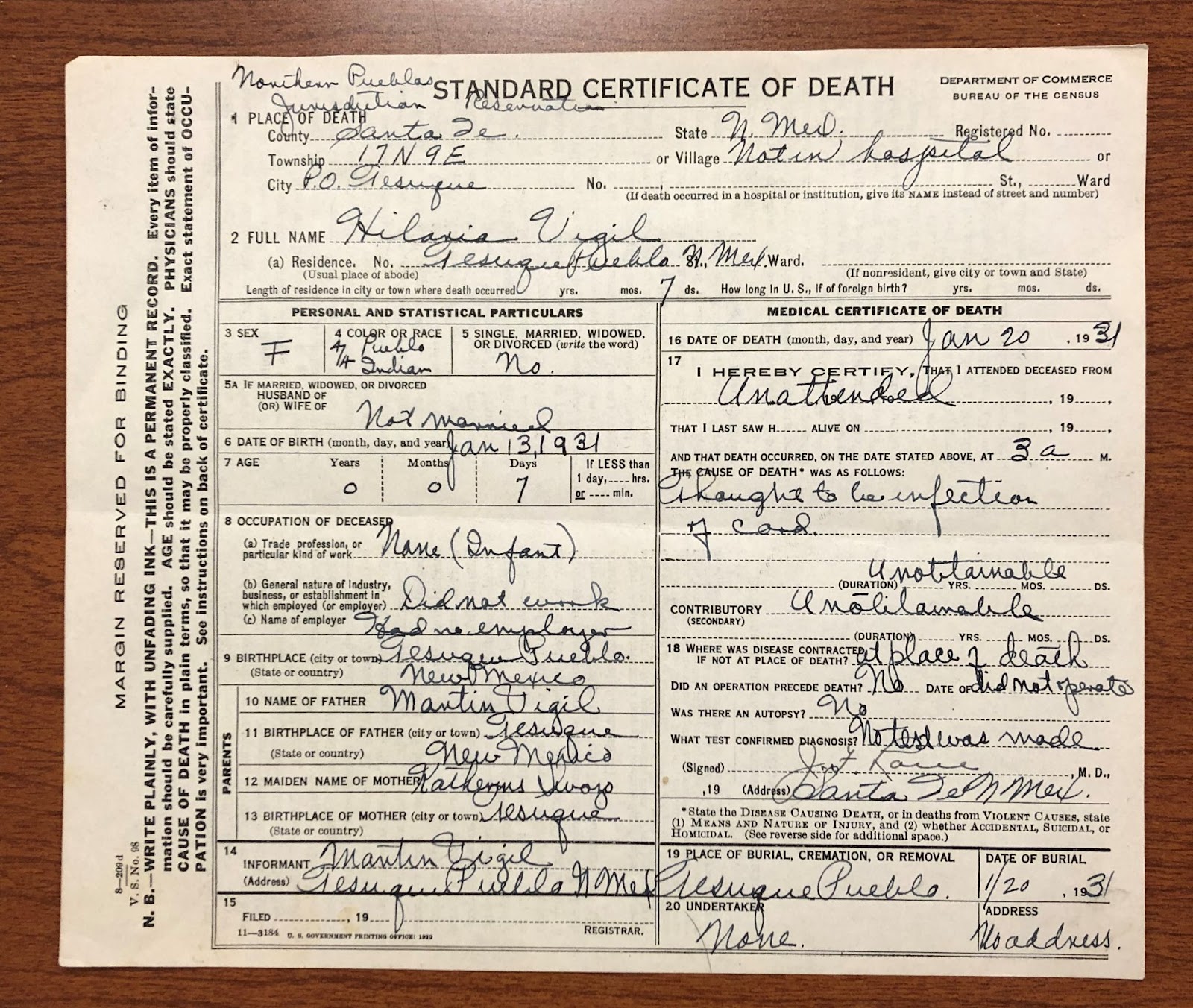 An example of the Bureau of Census Standard Certificate of Death, from the Northern Pueblos Agency records. (National Archives Identifier 1367572) 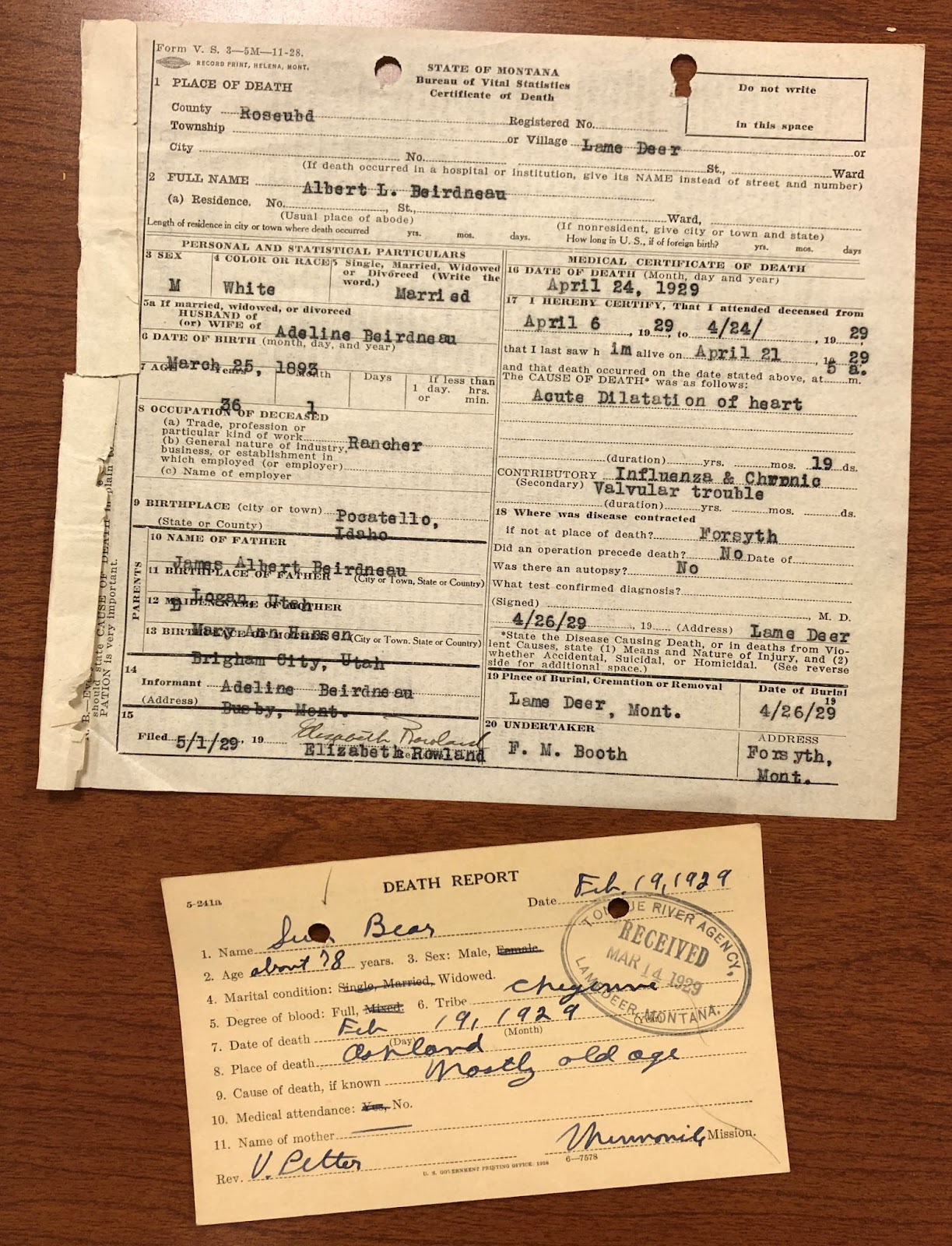 An example of a state level death certificate, this one from the Montana Bureau of Vital Statistics, as well as an Office of Indian Affairs Death Report postcard, to be filled out and sent to the agency superintendent. (National Archives Identifier 2579504) 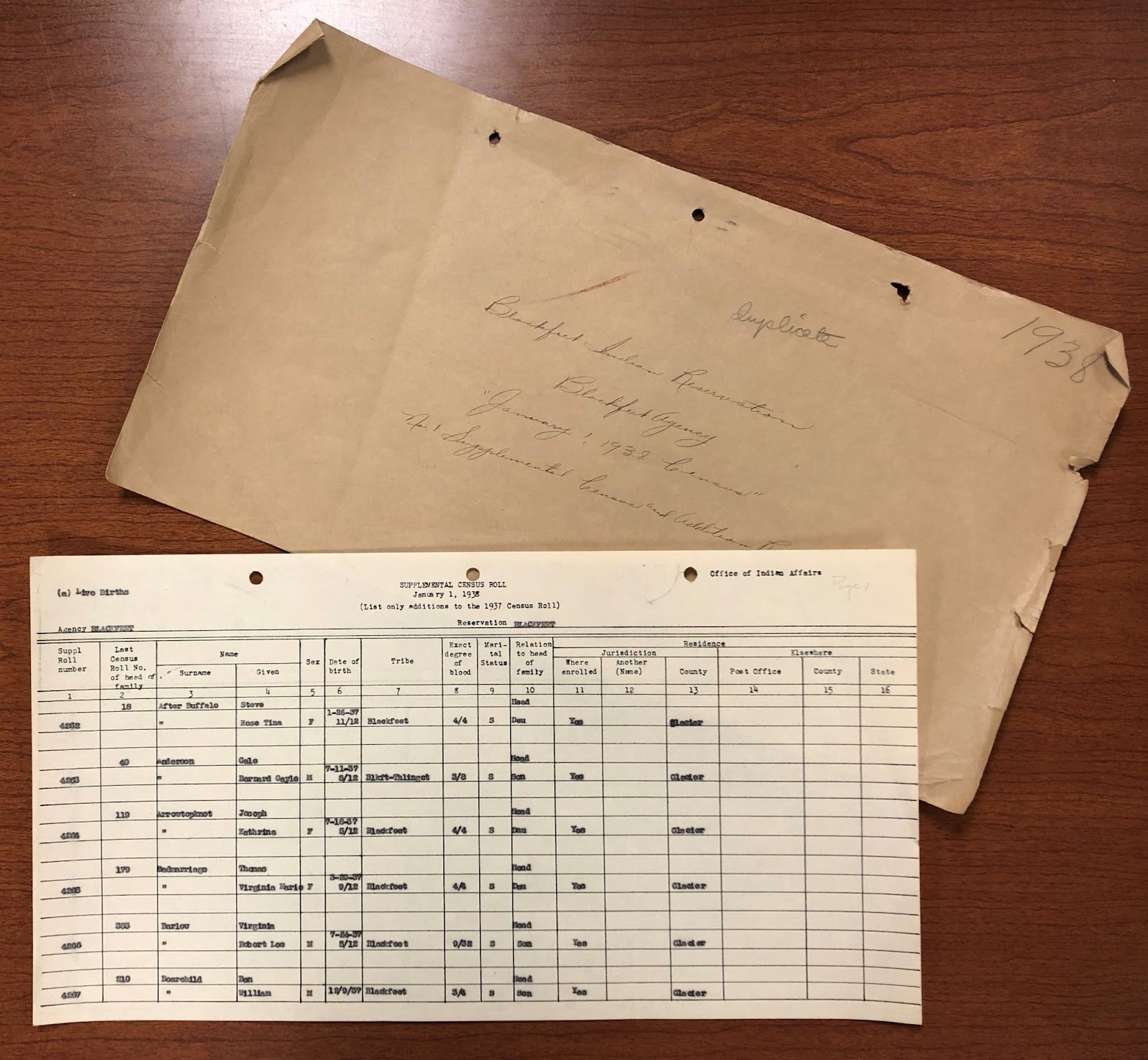 The census rolls compiled by agency superintendents can be another great resource for birth and death information. Supplemental census sheets, seen here, would be compiled on births and deaths in between when the regular censuses were taken. (National Archives Identifier 1682588)

SO WHERE ARE THE RECORDS?

Short answer: everywhere! These records are only found at the agency level with the office that directly administered a reservation and so are found at National Archives facilities nationwide. It is very important to know which reservation the person you are researching lived on, to help narrow your records search. In some cases, there are dedicated series of birth and death records and in other cases, the records are filed in larger general administrative records. These administrative records are organized according to the OIA field’s decimal filing system that was fully instituted in 1926. The 700 series covers health and social relations, with 741 assigned to “Births” and 742 “Deaths.” All RG 75 series and many of the individual folder titles can be browsed via our online Catalog here, a great place to see what’s out there and which NARA facility holds the record.