Searching for Martin Luther King, Jr., in the Records of the National Archives

Dr. Martin Luther King, Jr., was a pivotal figure in civil rights in America and human rights around the world, it is no wonder his efforts garnered the attention of the federal government. His presence amongst the records within the National Archives is wide and varied. Here I will discuss some sources of records covering Dr. King, his efforts, and his legacy.

Dr. King’s appearance within the Records of the FBI is historically well known, and his actions were tracked heavily by the Director of the FBI, J. Edgar Hoover, through the Bureau’s Counter Intelligence Program (COINTELPRO). Many of these records are available to the public, though often include redacted material due to informant information and privacy concerns, or require a review under the Freedom of Information Act (FOIA).

To understand where else in the FBI records you may find Dr. King, it is important to understand how their records are cataloged. The FBI divides its records into Classifications. The Classifications that a researcher might want to review when looking for records concerning or related to Dr. King and his activities include Classification 100: Domestic Security, Classification 157: Civil Unrest, and Classification 173: Civil Rights Act of 1964. He is also found in the National Archives Catalog when searching under his name. Dr. King’s assassination also became a major focus for years by the FBI, as they investigated not only the murder, but the events that happened thereafter.

The preservation of buildings that housed organizations and events that were important to the civil rights movement are important teaching tools for future generations. These buildings go through the application process to be added to the National Register and those records are maintained by the National Archives. As an example, the Montgomery Bus Boycott was kickstarted in 1955 at the Mt. Zion AME Zion Church in Montgomery, Alabama, where The Montgomery Improvement Association (MIA) was formed and Dr. King was named President of the Association. The church underwent the process to be added to the Register in 2002.

In 1974, the Martin Luther King, Jr. Historic District was established in Atlanta, GA, encompassing many notable buildings and structures relating to Dr. King and the civil rights movement. Among the buildings in the Historical Park include the Prince Hall Masonic Temple Building which housed the first office of the Southern Christian Leadership Conference (SCLC), The King Center where Dr. King is buried, his birth home, and Ebenezer Baptist Church. Over time the location has been improved upon and expanded and has become a place of pilgrimage for those looking to discover more about Dr. King’s life and legacy.

During his lifetime, Dr. King met and conferred with Presidents Dwight D. Eisenhower, John F. Kennedy, and Lyndon B. Johnson. His legacy continued on long after his assassination, as his wife, Coretta Scott King, and his children continued to push for civil rights with succeeding Presidents.

Eleanor Roosevelt exchanged many letters with or regarding Dr. Martin Luther King, Jr., and this material is now filed across The Eleanor Roosevelt Papers at the FDR Presidential Library, primarily in folders titled for the "Southern Christian Leadership Conference." Roosevelt’s correspondence with a wide variety of civil rights leaders, organizations, and the public – both activists and opponents – can be found throughout her Papers as well. Researchers should begin with the Correspondence 1957-1962 series.

Subsequent Presidential administrations continued to be involved with civil rights matters and the life and legacy of Dr. King and his family. President Richard M. Nixon met Dr. King when he was Vice President under President Eisenhower and dealt with the events post-assassination, among other matters regarding Dr. King. President Jimmy Carter, being from Georgia, interacted with members of the King family often and paid tribute to Dr. King both in and out of the office. 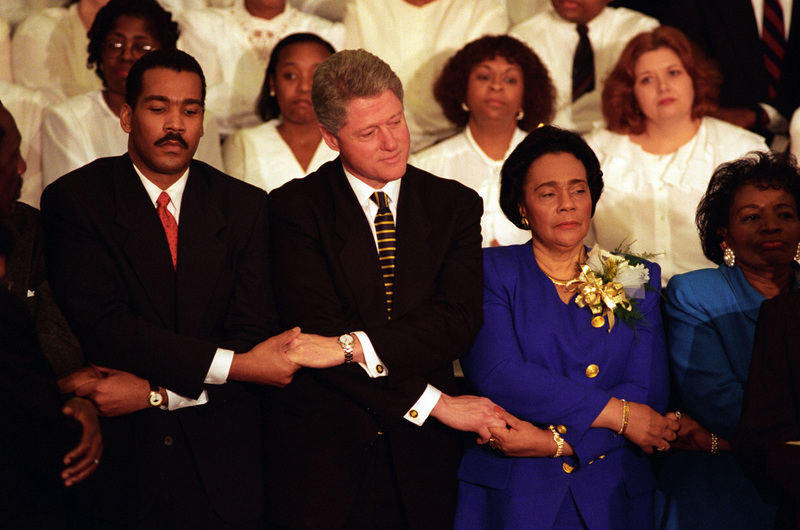 The George W. Bush Presidential Library makes available records related to the memorializations of Rosa Parks and Coretta Scott King upon their deaths in 2005 and 2006 respectively. The Library also contains holdings related to the groundbreaking of the Martin Luther King, Jr. Memorial in late 2006.

The Barack Obama Presidential Library contains photographs, video, and other records related to the official dedication of the Martin Luther King, Jr., Memorial in 2011. President Obama was also gifted a piece of the granite used to construct the Memorial; this item is now part of the artifact collections of the Obama Library.

Additional holdings of the Obama Library relate to the commemoration of the 50th anniversaries of significant Civil Rights events that had been organized by Dr. King: the March on Washington (photos / remarks) and Selma to Montgomery Marches (photos / remarks).  The Obama Library also contains a button from the 1963 March on Washington in its artifact collections; the button was originally displayed at the White House to commemorate Black History Month in 2016, when President Obama was in office. 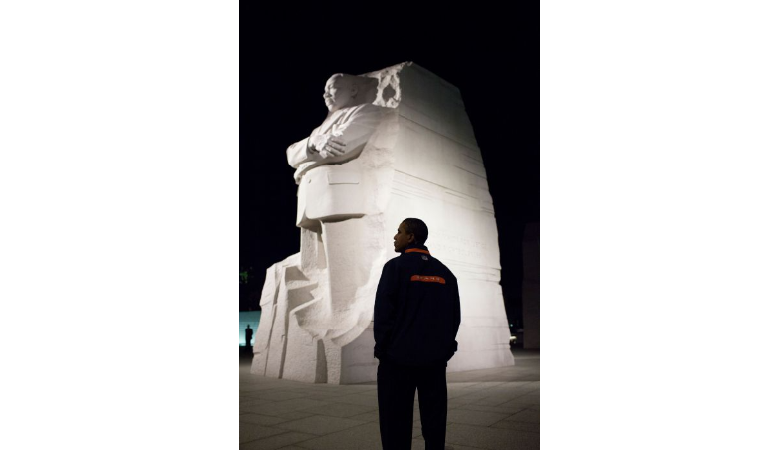 Dr. Martin Luther King’s legacy spans across these and many other federal agencies as well in the U.S. Federal Courts and the records of Congress. Records for presidential libraries can be accessed both on-site and online and you can begin your research for them here.

Records for the National Park Service (Record Group 79) are primarily located at the National Archives at College Park, MD. The records are divided into two major sections, first being primarily textual records. But a significant portion of records are found within the Cartographic Branch.

Records from the Federal Bureau of Investigation (Record Group 65) are also located at the National Archives at College Park, MD. Many records within the FBI still have restrictions and have been redacted and/or require a person to make a request under the Freedom of Information Act (FOIA) in order to view them.

Please note: Due to COVID-19 facility closures and evolving arrangements pertaining to research, you should call or correspond with staff at each facility before visiting to be briefed on the status of current research and arrangements.